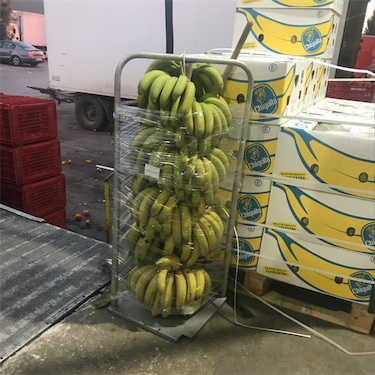 Yellow watermelons can vary greatly in size, shape and color depending upon variety. Whether round or oblong, they usually exhibit the standard bright green outer rind striped with darker green markings. The flesh can range from pale yellow to deep gold and may contain large brownish black seeds or be completely seedless. While their succulent and crisp texture is comparable to other standard red watermelons, their flavor is usually much sweeter offering notes of honey and apricot.

Yellow watermelon is available year-round with peak season in the summer.

Yellow watermelons are botanically a member of the species, Citrullus lanatus. They are a close cousin to the classic red variety watermelon, but lack the natural red pigment and antioxidant known as lycopene. Common seed varieties are the Tastigold watermelon, Yellow Flesh Black Diamond watermelon and the Desert King Yellow which is prized for its ability to grow in dry conditions.

Like other watermelons, the Yellow variety is composed of almost 90 percent water, offering a good supply of vitamins A and C and potassium. While it lacks the lycopene content of its red cousins, the Yellow watermelon has trace amounts of beta-carotene.

The Yellow watermelon may be used interchangeably with other watermelon varieties, with the advantage of offering a slightly sweeter flavor profile and striking color difference. They are usually eaten raw, but may be grilled or seared in a hot pan to caramelize the natural concentration of sugars. Use the juice of Yellow watermelons in cocktails, syrups and frozen desserts. Cubed watermelon flesh pairs well in salads that contain arugula, feta or goat's cheeses, fresh herbs, citrus, olive oil, olives, tomatoes, cucumbers, garlic and onions. Use the flesh in cold soups or pickle the rind. Yellow watermelon will keep up two weeks in the refrigerator.

The history of the watermelon did not start out as the sweet red watermelon we know today. Early texts written by European botanists have been uncovered depicting images and descriptions of watermelons of various shapes and sizes as well as varying flesh colors of red, white, yellow and orange. In fact, the original watermelon that grew wild in South Africa was most likely a yellow or white flesh variety, but lacked the high sugar levels of today’s watermelons. Modern improved seed varieties have been bred to improve flavor, consistency in size and texture and resistance to disease.

Recipes that include Yellow Watermelon. One