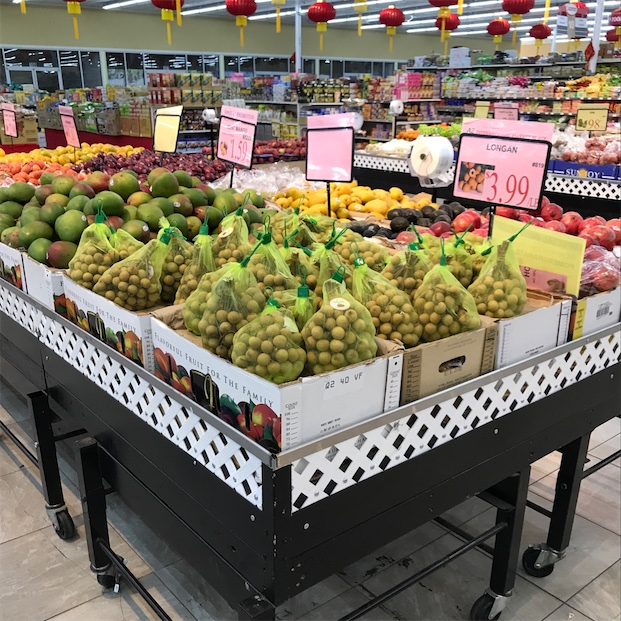 Beefsteak tomatoes, aptly named for their large size and meaty texture, have a classic tomato flavor, however, depending upon the variety, they can also be sweet to the taste. They are heavy, reaching weights as high as four pounds, and they range in color from pink, to vibrant red, to orange. Most are smooth in shape, although there are a few ribbed varieties, such as Red Ponderosa and Coustralee. When growing tomatoes, there are two main distinctions in the plant itself: determinate v. indeterminate. Determinate tomatoes bloom and set fruit all at once and then decline. Their blossoms grow at the ends of shoots, thus stopping growth and determining their length. Indeterminate tomatoes continue to grow and to produce tomatoes throughout the summer because the flowers grow along the vines rather than at the ends.

Beefsteak tomatoes are available year-round with a peak season in the summer months.

Botanically, the tomato is a fruit, but in 1883 the U.S. Supreme Court ruled that the tomato was legally a vegetable because of the way it was commonly used; tomatoes are among the most common plants grown in home gardens. The botanical classification of the tomato has had an interesting history, and debate over the scientific name continues today. The tomato was first placed in the genus Solanum, and identified as Solanum lycopersicum under the methodology of Carl Linnaeus, who developed the binomial system of naming plants and outlined it in his 1753 publication, â€śSpecies Plantarum.â€ť This designation was then changed to Lycopersicon esculentum, the term Lycopersicon deriving from the Greek word meaning â€śwolf peach,â€ť and esculentum simply meaning edible. However, current phylogenetic methods have shown the tomato to be situated firmly within the genus Solanum, and after years of preference for the name Lycopersicon esculentum, strong molecular DNA evidence is promoting the return to Linnaeus' original classification, Solanum lycopersicum.

Tomatoes are rich in vitamins A and C, and they are full of fiber. Field or vine-ripened summer tomatoes are higher in vitamin C than greenhouse tomatoes grown in the fall and winter, and fresh tomatoes have more vitamin C than when they are cooked or canned. Tomatoes are also noted for containing the antioxidant compound lycopene, which may help protect against prostate cancer and heart disease.

The size of the Beefsteak tomato makes it ideal for sandwiches and burgers. Try them in a stacked salad, sliced lengthwise and layered with avocado and mozzarella. Dice them and cook them down with garlic, olive oil, and fresh herbs for a quick pasta sauce. Or even roast slices of Beefsteak tomato with olive oil, salt and pepper, and then add to soups and sauces; roasting enhances their natural flavor. Like other tomatoes, Beefsteak tomatoes should be stored at room temperature until ripe, after which refrigeration can slow decay.

Around the same time that the myth of tomatoes being poisonous was dispelled, people in France started to believe that the tomato was an aphrodisiac, and began calling it "pomme d'amour," or "love apple."

The tomato originates from South America's western coast. They are native to the Andes region of Chile, Colombia, Bolivia, and Peru, however they are believed to have been domesticated in Mexico. It was in the early 1500s that returning Spanish colonists first introduced tomatoes to Europe. However, in North America, tomatoes were not widely embraced until the early 1800s. Despite being grown and used by pockets of colonial Americans, they were thought to be toxic as they are in the Solanaceae family, which includes deadly nightshades and other poisonous plants. This was disproved publicly in 1820 when Colonel Robert Gibbon Johnson ate a tomato on the courthouse steps of Salem, New Jersey.

Recipes that include Beefsteak Tomatoes. One