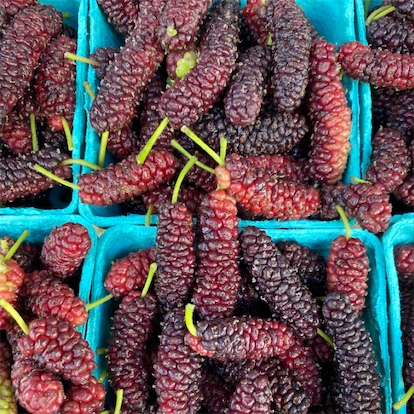 Suran, or Elephant yam, is the edible bulb or corm of a very unique looking single-stalked, flowering plant. After a year underground, the corm develops a unique flower with a central flowering stalk encircled by one large, maroon petal and topped with a similarly colored bulbous knob. The stalk can reach up to one meter in height. Once the flower dies, the corm produces one or two tall, green and white spotted stalks topped with several leafy branches. Suran are unearthed once the leaf stalk has died away. The root is round and compressed with a depression on top where the stalk was removed. When harvested, Suran can measure roughly 30 centimeters wide and 20 centimeters tall. A single Suran can weigh as much as 8 pounds, with some tubers weighing almost 30 pounds. Uncultivated Suran may have smaller cormlets attached and may have rootlets growing from its rough surface. The dark brown, almost black skin of the Elephant yam is bark-like but thin enough to be peeled. Its beige colored flesh has a texture like that of a sweet potato, crisp and firm. Suran has an earthy flavor that can also be nutty with a minimal amount of sweetness.

Suran, or Elephant yam, is available year-round in tropical climates, with a peak season in the late fall.

Suran (pronounced sue-ran) is a large tuber also known as Elephant yam. Botanically, the plant is classified as Amorphophallus paeoniifolius and is unrelated to the common yam, which is classified as Dioscorea. It is known in England as the Elephant Foot yam for its somewhat elephantine hoof-like appearance. In China Suran is called Cho mo yu in Chinese and Pungapung in Tagalog. The Elephant yam’s unique flower earned it the nickname “stinky lily” or “death flower” because of the unusual smell the flower emits just after fully bloomed. Its appearance and its utility have made it a popular and commercially successful plant to grow throughout its native region. Suran is a popular ingredient in Sri Lanka and in India, where it is used in curries and koftas in the northern part of the country.

Suran is a nutrient-dense tuber and good source of carbs. In Indonesia, Suran is the third most important source of carbohydrates after rice and corn. The tubers are rich in vitamin C, B-complex (thiamine, riboflavin and niacin), potassium and manganese. The corm also contains beta-carotene, as evidenced in its orange-hued flesh. Suran is a good source of dietary fiber and phytosterols, which are compounds that help lower bad or “LDL” cholesterol, making it heart healthy and easy to digest. Suran has a lower glycemic index than potatoes, which is ideal for diabetic diets.

Suran must be cooked before eating. The corm contains calcium oxalate crystals which can cause irritation to the mouth and throat if eaten raw or not fully cooked. The starchy tuber is a good substitute for potatoes or other root vegetables in recipes or as a side dish. They can be baked, boiled, or mashed. The neutral-flavored Suran will easily take on the flavor profile of whichever seasonings, spices and brines are being used. In India, “pickled” Suran is made by grating the root vegetable along with ginger and combining with green chiles, mustard oil and other spices. The mixture is jarred and left to sit in the sun for three days. Suran can be used to make a gluten-free flour or mashed and distilled into alcohol. Do not refrigerate Suran because it will affect its overall flavor. Store the tubers in a cool, dark place with good ventilation.

In Uttar Pradesh, in northern India, where Suran is often known as Jimikand, the tuber is the main ingredient in a dish called ‘tariwale suran.’ The masala dish is served during the prayer of Laxmi Pujan, on the third day of Diwali, the Hindu festival of lights. Suran is used in traditional Ayurvedic medicine throughout India. The tuber is used for its anti-inflammatory properties, as well as digestive, aphrodisiac and rejuvenating qualities.

Suran is native to the hot and humid, tropical region of southeast Asia, including the islands of Indonesia, Malaysia and the Philippines. It has been cultivated for centuries. The plant is easily naturalized, and can be found as far west as India, south to Northern Australia and west to the islands of Polynesia. It is widely cultivated in northern India, and to a small degree in the south. Giant mounds of the Suran can be seen farmers markets throughout the entire region, from India to Fiji. Outside of its native range, Amorphophallus paeoniifolius is more likely to be grown by home gardeners and specialty growers. The plant is sometimes known botanically by the synonym Amorphophallus campanulatus.

Recipes that include Suran Root. One