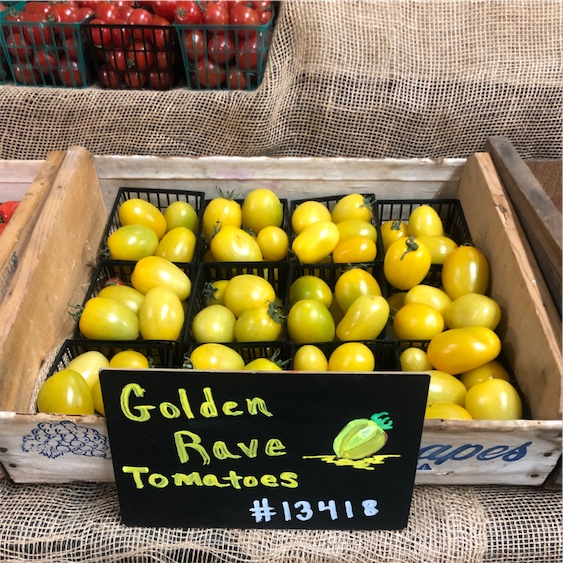 Poire de Terre is a tuberous root that can widely vary in appearance depending on growing conditions. The roots will range in size from small to large and may have a cylindrical, oblong, or irregular shape with tapered ends. There are also multiple varieties of Poire de Terre that are found in orange, brown, white, tan, and purple hues. The skin of the roots in the photograph above is rough, firm, and tan, sometimes covered in light pink spots and patches. Underneath the surface, the flesh is crisp, aqueous, ivory to cream-colored, and starchy. Poire de Terre has a watery and crunchy consistency with a subtly sweet flavor reminiscent of celery, pear, apple, and watermelon.

Poire de Terre is available in the fall and can be stored through the spring.

Poire de Terre, botanically classified as Smallanthus sonchifolius, is a tuberous root that belongs to the Asteraceae family. The name Poire de Terre translates from French to mean “pear of the earth,” which is derived from the root’s fruit-like flavor and underground growth habits. Poire de Terre is also known by many other names, including Peruvian Ground Apple, Bolivian Sunroot, and its most famous Spanish name, Yacón. The root is native to South America, and its original name Yacón is derived from Quechua, the language of the Incas, roughly translating to mean “water root.” Yacón was used by the Incas as a source of water on long journeys and is a perennial plant that is closely related to sunflowers and Jerusalem artichokes. In the 19th and 20th centuries, the roots were transported via trade routes to Europe but were not initially successful in the commercial markets. In the modern-day, Poire de Terre has seen a recent increase in popularity as it is now marketed as a specialty health food, cultivated for its high-water content, unique flavor, low calories, high yields, and extended storage capabilities.

Poire de Terre is a good source of fiber, which can help regulate digestion, and provides potassium, which is an electrolyte that can balance fluid levels within the body. The roots also contain fructooligosaccharides, which are a form of carbohydrate that gives the root its naturally sweet flavor.

Poire de Terre is best suited for both raw and cooked applications such as roasting, steaming, stir-frying, boiling, baking, and frying. The roots are primarily peeled and eaten fresh to showcase their sweet, juicy, and crunchy flesh. Poire de Terre can be sliced and added to salads, grated and tossed into slaws, or cubed and stirred into fruit salads. In South America, Poire de Terre is commonly added to salpicon, which is a traditional salad using tropical fruits, and the roots are used to absorb flavors and add a crunchy texture. In addition to fresh applications, Poire de Terre can be sliced and roasted into chips, roasted with other root vegetables as a side dish, or baked into casseroles, gratins, and pies. They can also be pressed into juice, blended into smoothies, pickled, dried, or cooked into a syrup. The roots retain their crisp consistency even through high heat applications, and they can also absorb accompanying flavors, making them suitable for curries, stews, and soups. Beyond the roots, the leaves of the plant are steeped into a tea. Poire de Terre pairs well with fruits such as pineapple, raspberries, blackberries, mango, apples, grapes, and papaya, lemon juice, celery, green beans, carrots, meats such as beef, pork, and poultry, seeds such as pumpkin, sunflower, walnuts, and almonds, and raisins. The roots will keep 3-4 months when stored in a cool, dry, and semi-humid place.

In Europe, Poire de Terre is primarily imported from South America in the form of a syrup and is heavily marketed towards health-focused households with a disposable income as a natural sweetener. With an increasing shift towards active lifestyles in Europe, the syrup is touted as one of the lowest-calorie sweeteners that can be used as a sugar replacement. Europeans are mixing the syrup into smoothies, drinks, and baked goods, and many also believe the sweet liquid to help with digestion. Due to its recent popularity, many farms throughout Europe are also cultivating the tuberous root as a supplemental item to sell in addition to making their own syrup for profit. Poire de Terre syrup is created by juicing the roots and allowing evaporation to occur until a thick liquid remains.

Poire de Terre is native to the Andean region of South America and has been growing wild since ancient times. The root is specifically found in the Yungas, which is a warmer and more humid forest region situated along the eastern slopes of the Andes and extends throughout Peru, Argentina, and Bolivia. Poire de Terre was exported outside of South America in the 19th century and was introduced to Europe and the United States but was initially met with little interest in commercial markets. Later in the 20th century, the root began to be recognized for its nutritional properties, especially when it was made into a syrup and continued to spread to Asia and New Zealand. Today Poire de Terre is cultivated around the world and is found through specialty grocers, farmer’s markets, and home gardens in South America, North America, Europe, New Zealand, and Asia. In Europe, the roots are primarily grown in the United Kingdom, the Netherlands, Czech Republic, Germany, and France.

Recipes that include Poire de Terre. One