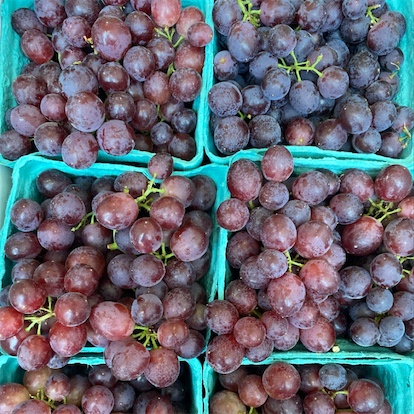 Mayan Gold potatoes are moderately sized, elongated tubers that have an oval to oblong shape. The tubers also have a somewhat uniform, curved appearance that tapers to rounded, blunt ends. The skin is semi-smooth, yellow, and firm with a few medium-set eyes scattered across the surface. Underneath the skin, the flesh is dense, golden yellow, floury, and dry. When cooked, Mayan Gold potatoes have a soft and fluffy consistency with an earthy, rich, and nutty flavor.

Mayan Gold potatoes are available year-round, with a peak season in the late summer through fall.

Mayan Gold potatoes, botanically a part of the Solanum genus, are an early maincrop cultivar belonging to the Solanaceae or nightshade family. The variety was created specifically for the cold climate of the United Kingdom and was developed from a rare Solanum cultivar group known as Phureja, which are wild tubers native to Peru. Since their release to market in the early 21st century, Mayan Gold potatoes have been favored by chefs for their nutty, rich flavor and rapid cooking times. The tubers are also commonly grown in home gardens as a novel variety and are marketed as a specialty culinary potato in commercial products.

Mayan Gold potatoes are a good source of vitamins A and C, which are antioxidants that can boost the immune system, improve organ function, and increase collagen production within the body. The tubers also contain some fiber, potassium, and carotenoids, which are the bright yellow pigments found in the skin and flesh that act as antioxidants.

Mayan Gold potatoes are best suited for cooked applications such as roasting, baking, and steaming. The tubers are favored for their smaller size and cook at a rapid rate, making them a popular choice among restaurant chefs. They also develop a crispy exterior with a soft, fluffy interior. Mayan Gold potatoes can be sliced into wedges and roasted, mashed for a side dish, or sliced thinly into chips. The tubers can also be steamed, which retains the flesh’s golden hue, nutrients, and flavor. Mayan Gold potatoes pair well with spices such as cumin, turmeric, and paprika, herbs such as marjoram, thyme, coriander, parsley, and tarragon, tomatoes, carrots, onions, radish, and cucumber. The tubers will keep 1-4 weeks when stored in a cool, dry, and dark place.

Mayan Gold potatoes were one of the first varieties created in the United Kingdom that were descendants of potatoes from the Phureja cultivar group. This group is native to Peru and is a wild species that grows well in areas with mild climates. The Scottish Crop Research Institute of the United Kingdom took the wild potatoes from this group and crossed them with other Solanum tuberosum species to create the Mayan Gold potatoes that are available in the modern-day markets. Chefs highly praise these tubers for their rich, nutty flavor, which is attributed to the wild potato parent variety, and the cultivar has earned a favorable reputation as a culinary tuber. Chef Antony Worrall Thompson, the owner of The Greyhound restaurant in the United Kingdom, highly favors Mayan Gold potatoes and is just one of the many chefs who believe the variety is one of the best roasting potatoes. Thompson even featured the variety in his cooking demonstration at The British Potato Event in 2007, which is an event in Harrogate, England, where potato industry experts can network to discover new varieties, discuss yearly health requirements, and learn improved cultivation habits.

Mayan Gold potatoes were created by the Scottish Crop Research Institute in the United Kingdom and were bred from wild potato varieties known as phureja, which are native to the Andes Mountains region of Peru. The variety was released after fifteen years of research in the United Kingdom in collaboration with supplier Agent Greenvale AP in the early 21st century and was specifically designed to be able to survive the cold and wet European climate. Today Mayan Gold potatoes are available at specialty grocers across the United Kingdom and are grown in home gardens in other regions of Europe. The variety has also been sent to Kenya, Africa, for local cultivation and has seen some commercial success.

Recipes that include Mayan Gold Potatoes. One