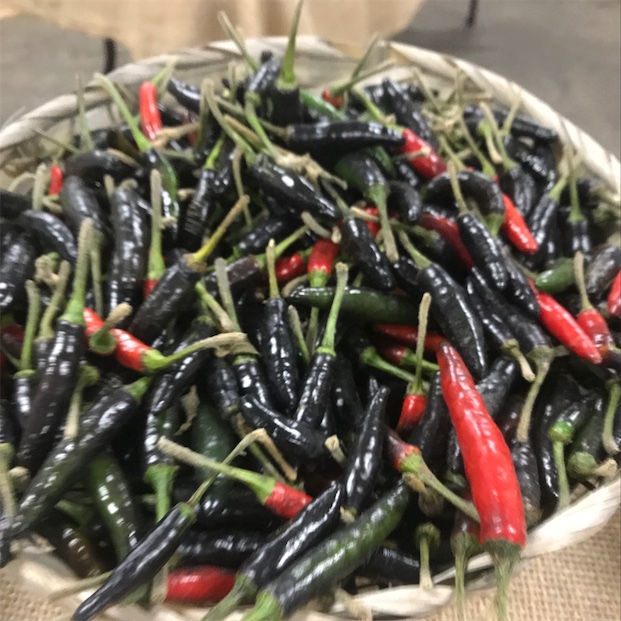 White Cascade potatoes are moderately sized, uniform tubers that are oval to oblong in shape. The skin is thin, cream-colored, and smooth, covered in shallow eyes and a few light brown markings. The surface of the tubers may also appear somewhat flaky and bear a few cracks on the surface, depending on growing conditions. Underneath the skin, the flesh is firm, crisp, and white with low starch content creating a slightly waxy consistency. White Cascade potatoes develop a tender, dense, and creamy texture when cooked, with a mild, earthy, and subtly sweet flavor.

White Cascade potatoes, botanically classified as Solanum tuberosum, are a mid-season variety that belongs to the Solanaceae or nightshade family. The uniform tubers were initially created in Washington state as an improved variety for commercial processing into French fries, but they also became a popular cultivar that could be harvested young as a creamer potato. Growers favor White Cascade potatoes for its high yields, neutral flavor, and consistent size and shape. Beyond processing, White Cascade potatoes have entered fresh markets for home consumption and are utilized in a wide variety of every day, culinary applications.

White Cascade potatoes are an excellent source of vitamin C, which is an antioxidant that can boost the immune system. The tubers are also a good source of potassium, which is a mineral that can help regulate fluid levels within the body and provide vitamin B6 and fiber to regulate digestion.

White Cascade potatoes are best suited for cooked applications such as steaming, grilling, roasting, baking, frying, and boiling. The tubers have thin, edible skin and have the ability to hold their shape well when cooked, allowing them to be used in a wide variety of preparations. The potatoes can be boiled and coarsely mashed with fresh herbs and mushrooms, sliced and layered into casseroles, cubed and tossed into soups, stews, and curries, or boiled and tossed into green salads. White Cascade potatoes can also be sliced into wedges and roasted, shredded and fried into hash browns, or sliced and baked into chips. White Cascade potatoes pair well with cauliflower, bell pepper, cabbage, kale, spinach, chard, onions, sour cream, applesauce, meats such as bacon, ham, sausage, poultry, and beef, cheeses such as cheddar, gruyere, and parmesan, herbs such as rosemary, parsley, and thyme, mustard, and white pepper. The fresh tubers will keep 2-4 weeks when stored whole and unwashed in a cool, dry, and dark place.

Cheese and vegetable boards became a popular appetizer in the early 1900s with the rise of cocktail hour, but the finger-food spreads have recently reappeared in the culinary spotlight in 2019 through social media platforms such as Instagram. Showcasing boards of meticulously placed vegetables, dips, fruits, and cheese has become an art form, and the spreads have carried into 2020 with a new trend known as the French fry board. These starch-centric plates feature French fries in multiple colors, sizes, and shapes such as wedge fries, crisscross fries, sweet potato fries, and seasoned fries. On these boards, many of the fries are made from White Cascade potatoes, which were initially developed for commercial fry production. The oblong, uniform shape of the tuber provides consistent cuts for slender, crispy fries, but the variety is also being used in the fresh market for homemade French fries in varying sizes and shapes. The boards are also aesthetically eye-catching with their brightly colored sauces and dips of beet hummus, crème fraiche, ranch, sriracha aioli, guacamole, and sweet and sour. Initially, the potato spreads were only found on social media, but French fry boards are now being offered at restaurants across the United States as a sharable appetizer.

White Cascade potatoes were created by Washington State University in the mid-20th century in Washington State of the United States. The variety was created from a cross between potato varieties known as PI 214372 and B3820-14 and was released to commercial markets in 1969. White Cascade potatoes were also officially registered in Canada in 2000 and are found through specialty growers at farmer’s markets throughout Canada and the United States. The potatoes featured in the photograph above were sourced from Weiser Family Farms, located in Southern California.