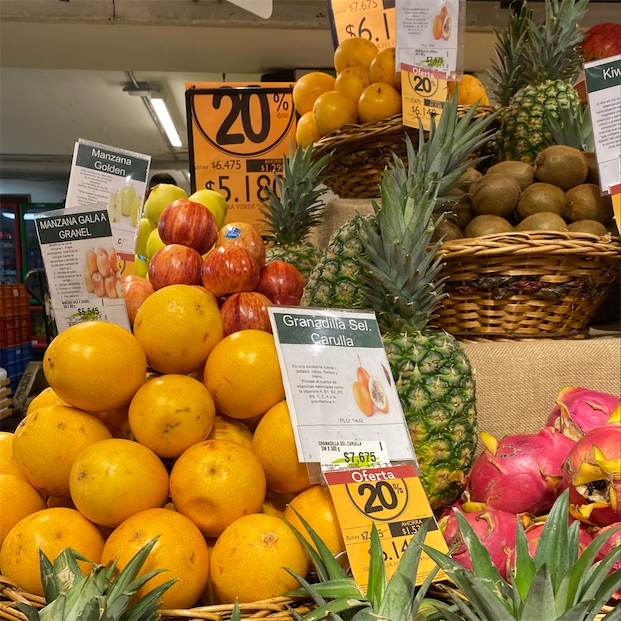 Pippin apples are round, ovate, to oblong fruits with a slightly lopsided appearance. The skin is smooth, waxy, ribbed, and ranges in color from light green to yellow-green, covered in prominent lenticels and the occasional pink blush. The surface surrounding the stem may also be covered in a rough, brown russet. Underneath the skin, the flesh is crisp, pale green to white, fine-grained, aqueous, and aromatic. Pippin apples are initially astringent and tart when harvested, mellowing in flavor when kept in cold storage. Once the apple has increased its sugar content in storage, the flesh develops a sweet-tart flavor with notes of pine, citrus, walnut, and green tea.

Pippin apples are harvested in the late fall and can be stored until the early spring.

Pippin apples, botanically classified as Malus domestica, are an heirloom winter variety that belongs to the Rosaceae family. Also known as Newtown Pippin apples and Albermarle Pippin apples, the word pippin means seedling and is a reference to the cultivar’s origins of being grown as a chance seedling. Pippin apples are believed to be one of the oldest American apple varieties that were commercially cultivated throughout the 18th and 19th centuries. In the modern-day, multiple varieties of apples are labeled with the pippin descriptor, but the majority of these apples are no longer grown for commercial markets. Pippin apples are considered a rare variety, often overshadowed by granny smith apples, and are found in local farmer's markets along the east and west coasts of the United States. They are also widely used for juice and cider production. The famous S. Martinelli & Company currently purchases over eighty-five percent of the Pippin apples from Northern California for their sparkling ciders.

Pippin apples are a good source of fiber, which can help stimulate the digestive tract and contain potassium, which is a mineral that can help regulate fluid levels within the body. The apples also contain vitamins A and C, as well as a trace amount of boron.

Pippin apples are best suited for both raw and cooked applications such as baking, stewing, roasting, and boiling. The apples are not consumed immediately after harvest and are commonly stored for 1-2 months to increase sugar content, reduce acidity, and develop a pleasing, complex flavor. Once ready for consumption, Pippin apples can be eaten fresh, out-of-hand, pressed into juice or cider, or cooked into applesauce, apple butter, jams, or compotes. The apples can also be baked into pies, cobblers, tarts, muffins, bread, cakes, and turnovers. It is important to note that the flesh browns quickly, so the apples should be used shortly after slicing. Pippin apples can also be dried for extended use and ground into a powder for use as a seasoning in both savory and sweet preparations. Pippin apples pair well with spices such as cinnamon, clove, and nutmeg, wildflower honey, vanilla, caramel, mustard greens, oranges, apricots, dates, nuts such as almonds, pecans, and walnuts, and gorgonzola cheese. The fresh apples will keep 1-4 months when stored whole and unwashed in a cool, dry, and dark place such as the refrigerator.

Pippin apples were given the name Albermarle Pippin apples after the county in Virginia, where the variety was planted in the early 18th century. Many residents of Albermarle believed their apples developed a unique flavor from the soil and climate of Virginia, which distinguished the fruits from other Pippin apples grown across the country. Albermarle Pippin apples were so loved, that American minister to Great Britain Andrew Stevenson gave a basket of the fruits to Queen Victoria of England as a gift in the early 19th century. The gift basket was received with such high favor that the Queen lifted the tariff on imported apples to ship more of the American variety into the palace. With the Queen’s approval, Pippin apples became a coveted, specialty cultivar in England, and wealthy English households would pay triple the price of local varieties to obtain a favorable reputation of being able to afford the exotic variety.

Pippin apples are believed to have originated as a chance seedling or “pip” near the estate of Gersham Moore in Newtown, New York, in the early 18th century. The variety quickly became one of the first varieties to be grown in the United States, and George Washington and Thomas Jefferson also cultivated the apples at their home estates. In the 19th century, Pippin apples were exported to London, where they became a favorite of Queen Victoria. Over time, Pippin apples faded in popularity as new varieties such as the granny smith were introduced into American markets. Today Pippin apples are grown on a small scale for commercial processing in California and can also be found through specialty farms in Washington, Oregon, New York, and Virginia.

Recipes that include Pippin Apples. One