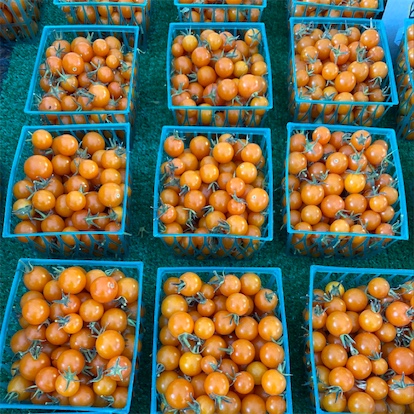 Comice pears range from small to large in size and have a distinctly squat shape with a large bulbous bottom and a short, well-defined neck connecting to a thick brown-green stem. The yellow-green skin is smooth with prominent lenticels or pores and may have red blushing on one side of the fruit where the sun’s rays were most direct. The skin is soft, very fragile, and bruises easily. The flesh is ivory to off-white and is silky, creamy, moist, and fine-grained. When ripe, Comice pears have buttery and very juicy texture, are highly aromatic and have an exceptionally sweet, mellow, and earthy flavor.

Comice pears are available in the late summer through early spring.

Comice pears, botanically classified as Pyrus communis, grow on semi-dwarf, compact trees that are members of the Rosaceae family along with apricots, peaches, and apples. Also known as the Doyenné Du Comice, Comice pears are a French variety that is known as one of the sweetest and juiciest of all of the European varieties favored for fresh eating. The majority of Comice pears are green, but there were some newer varieties developed in the 1960s that are a vibrant red. Comice pear trees are also desired for home gardening and private orchards, as the tree is one of the longest living varieties surviving up to seventy-five years. It is drought tolerant, prolific, and produces many succulent, flavorful fruits during the holiday season.

Comice pears are a good source of vitamin C and fiber.

Comice pears are best suited for raw applications as their sweet, juicy, and soft flesh do not hold up well to cooking. They can be sliced and served alone or paired with creamy cheeses for complementary flavor. They can also be sliced and added to enhance watercress or spinach salads or added to pancakes, rice pudding, soups, or made into pear butter. Comice pears can be canned or used in select baked goods such as a rugelach, which is a crescent-shaped pastry filled with seeds, chocolate, fruit, or nuts, made into a granita with green tea and honey to serve over ice cream, cooked into a compote with earl grey and vanilla, or even served in cocktails such as a spicy pear mojito. Comice pears compliment rosemary, cardamom, cinnamon, anise, curry powder, turmeric, garam masala, raisins, almond, hazelnut, pecans, chestnuts, chicken, coconut, onion, garlic, sweet potatoes, arugula, cilantro, maple syrup, camembert, gorgonzola, blue, and brie cheese. The delicate skin of the Comice pear can bruise or tear easily, but when handled properly, the pears will store well. They will keep 2-6 weeks when stored in the refrigerator. When kept at room temperature, they will keep for a couple days.

Comice pears have earned the moniker “Christmas pear” because they are in peak season during the holiday months and are favored for their color, size, flavor, and juiciness. They are often placed in fruit baskets on dining tables as edible décor or are given in holiday gift baskets to friends and family. Both the green and red varieties are used in holiday baskets and are commonly used together to create a festive color scheme.

Comice pears were first cultivated in the mid-1800s near Angers, France and were introduced to the market in 1849. The first red-colored Comice pear appeared as a “bud sport” on a tree in Oregon in 1960. Today, both colored varieties can be found at farmers markets and grocery stores and are grown primarily in the Pacific Northwest of the United States and some areas of France.

Recipes that include Comice Pears. One