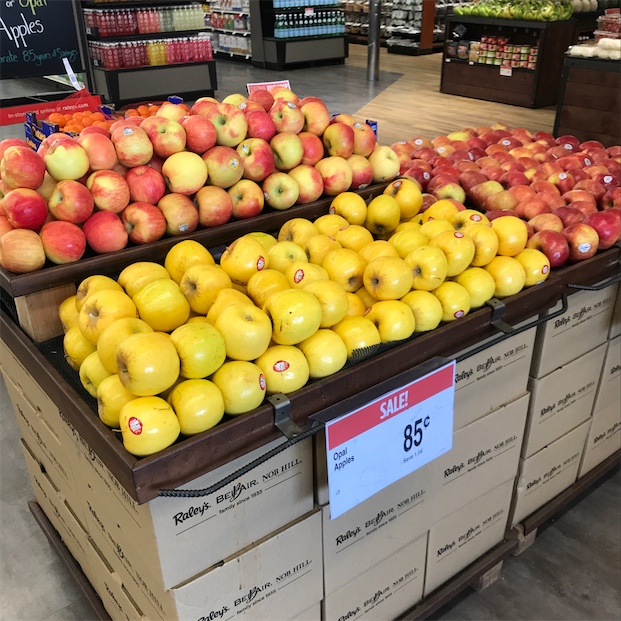 Monterrey pears are medium to large in size and are rounded with an asymmetrical, apple-like shape and a slender red-brown stem. The smooth, yellow-green skin transforms to a richer yellow when ripe, are very firm to the touch, and are covered in small lenticels or pores that turn deeper brown when mature. The brown lenticels are the best way to determine whether this variety is mature and ready to be picked as the firm flesh will not soften when ripe. The bright white flesh has a crisp texture like an apple and is free of any grittiness. The flesh also encases a central core with a few black-brown seeds in the center. When ripe, Monterrey pears are juicy and crunchy with a sweet and mild flavor.

Monterrey pears are available in the early fall through winter.

Monterrey pears, botanically classified as Pyrus pyrifolia, are a large variety from northern Mexico that are members of the Rosaceae family along with peaches and apples. Believed to be a hybrid between the garber pear, a popular southern Texas variety, and a Japanese pear, Monterrey pears are named for the city of Monterrey, Mexico, located in the northern state of Nuevo Leon, and were introduced to the United States in the early 1950s. Monterrey pear trees can reach over seven meters in height and are predominately used in home orchards as they are resistant to disease, prolific bearers, and are hardy in climates with mild winters.

Monterrey pears are best suited for raw and cooked applications such as baking and poaching. They are an excellent dessert pear due to their large size and crisp texture and can be used in tarts, pies, muffins, bread, and cakes, or poached in wine, honey, or cinnamon for a sweet treat. They can also be used in savory dishes like stuffed pork or chicken salad. Monterrey pears can be sliced fresh and layered in a grilled cheese sandwich with a rich gouda, tossed into leafy green salads, fruit salads, and coleslaw, or paired with strong cheeses, nuts, and other fruit on a cheese plate. Monterrey pears compliment arugula, kale, walnuts, pecans, pine nuts, almonds, goat cheese, blue cheese, gorgonzola cheese, grapes, ice cream, sugar, honey, maple syrup, and meats such as pork, turkey, or poultry. They will keep up to one week when stored in the crisper drawer of the refrigerator.

Monterrey pears are descendants of the garber pear which, around the turn of the 19th century, was known in Texas as the “home pear” for its tendency to be grown in backyards and home gardens. Monterrey pears are also favored for home orchards as they are resistant to diseases such as fire blight and are popular among locals for its crisp texture and juicy and sweet flavor.

Monterrey pears were first grown in Monterrey, Mexico, which is a town about eighty miles southwest of the United States-Texas border. A descendant of the garber pear, Monterrey pears were first cultivated and made available at a local nursery just outside of San Antonio, Texas in 1952, and then spread to neighboring states that share a similar mild winter climate. Today Monterrey pears can be found through small orchards that sell to specialty grocers and farmers market in Texas, southern California, and select regions throughout the Southwest in the United States.

Recipes that include Monterrey Pears. One

Someone shared Monterrey Pears using the Specialty Produce app for iPhone and Android.