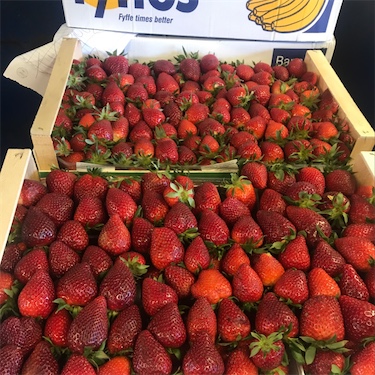 Dayak onions are small bulbs that produce several long, ribbon-like leaf stalks with a single flowering stem. The smooth, dark red bulbs are shaped like rounded diamonds with small, wispy brown roots extending from the ends. Resembling shallots, the bulbs are also covered in paper thin, brown-maroon coverings and the flesh is red with many layers of white rings. The long, slender leaves are green and can grow up to forty centimeters in height, and the flowering stem bears five-petaled, white flowers that bloom in the late afternoon. Dayak onions are crisp with an earthy scent and a slightly astringent flavor.

Dayak onions, botanically classified as Eleutherine palmifolia, are not onions, despite their similarity in appearance, and are members of the Iridaceae family, related to the iris and the spice saffron. Indigenous to Indonesia and locally known as Bawang Dayak, Bawang Sabrang, and Diamond onions, Dayak onions have been used by the Dayak people of Borneo for generations. Favored for their medicinal properties, Dayak onions are predominately grown for medicinal use and are only occasionally used in culinary dishes.

Dayak onions are used primarily for health benefits, but if used for culinary preparations, Dayak onions are best suited for both raw and cooked applications such as sautéing, boiling, or frying. The bulbs can be chopped and added to fresh salsa or tossed into salads. They can also be mixed into stir-fries, sautés, soups, or curries. Dayak onions pair well with shrimp, fish, poultry, beef, tamarind paste, belacan, ginger, tomatoes, eggplants, broccoli, peas, carrots, potatoes, and steamed rice. The bulbs will keep 2-3 months when stored in a cool, dry place. Thinly sliced, dried Dayak onions will keep up to three months in an airtight container.

The indigenous people of Borneo use Dayak onions for conditions ranging from intestinal disorders, parasites, high blood pressure, constipation, to viruses. Traditionally, Dayak onions were dried and used for tinctures, teas, or poultices. The bulbs are also crushed into a powder, mixed with water, and consumed.

Dayak onions are believed to be native to the island of Borneo, specifically to Kalimantan, Sarawak, and Sabah. The parent plant was likely brought to the island with the Portuguese from South America in the early 16th century. Since then, the plants are grown by the local indigenous people, collectively called Dayak, or Dyak, which is a general term for any non-Malay or non-Muslim, native Bornean. Today, Dayak onions are primarily cultivated by various Dayak tribes in the mountains of central Borneo. They are taken by boat and plane to the neighboring Malaysian islands of Java and Sumatra and are also found in Indonesia and Southeast Asia where they can be spotted at markets in Pekan, Pahang, or Bandar Lampung.