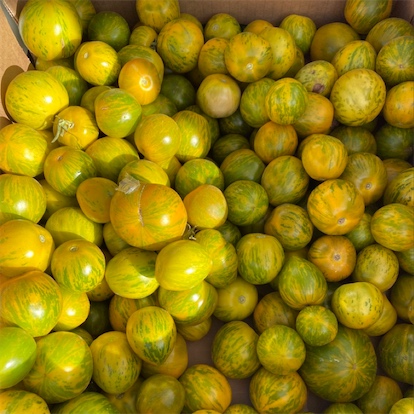 Straw mushrooms grow in clusters and have varying appearances depending on maturity. When young, the cap is encased in a thin skin, and the stalk is short, creating an oval, egg-like shape. The top of the cap is generally dark brown, lightening to a cream-colored hue around the edges and on the stem. As the mushroom matures, the stem lengthens to 4 to 14 centimeters, and the protective skin is separated from the cap allowing the cap the expand and widen. The cap then transforms into a convex, broad shape, sometimes almost appearing flat, and averages 5 to 12 centimeters in diameter. The once dark brown cap also lightens to a grey or shade of light brown. Underneath the cap, the crowded gills range in color from white to pink, depending on maturity, and are not attached to the stem. Straw mushrooms have a smooth, velvety, and tender texture with a mild, earthy, and musky flavor.

Straw mushrooms, botanically classified as Volvariella volvacea, are small, edible fungi with a mild, musky flavor that belongs to the Pluteaceae family. Also known as Chinese mushrooms, Paddy Straw mushrooms, and Nanhua mushrooms, Straw mushrooms are widely consumed in Asia and are valued for their neutral flavor, versatility, and high nutritional properties. Straw mushrooms are cultivated in the warm, tropical climates of Asia and are often grown on agricultural wastes such as rice straw, which is where the mushroom also earned its name. The fungi can be harvested in its young or mature state, with the young, unopened mushrooms being labeled as unpeeled and the opened mushrooms labeled as peeled. Unpeeled mushrooms are the most popular version sold in local markets in Asia as they are believed to have higher nutritional properties and a stronger flavor. It is important to note that Straw mushrooms are primarily found in Asia, and in North America, there is a highly toxic look-a-like known as the death cap or amanita phalloides that can be lethal when consumed. Extensive research and consultation with a trained foraging expert should be conducted before harvesting mushrooms from the wild.

Straw mushrooms are an excellent source of copper, which provides anti-bacterial properties, and potassium, which can help regulate fluids and maintain optimal blood vessel functioning. The fungi also contain vitamins B, C, and D, fiber, zinc, iron, and amino acids. In traditional Chinese medicine, Straw mushrooms are believed to help clean and thin the blood while also removing heat from the body.

Straw mushrooms are best suited for lightly cooked applications such as sautéing, boiling, or stir-frying. The delicate mushrooms are primarily added at the end of the cooking process and have a musky, neutral flavor allowing them to be used in a wide variety of dishes. Straw mushrooms can be added to stir-fries or noodle dishes such as chow mein, blended into sauces, or served as a side dish to grilled meats and fish. They can also be tossed into stews or soup such as tom yum, served as a topping on burgers, or cooked into omelets. Vegetarians often use the mushroom as a meat replacement, and the mild flavor of the fungi allows them to be a substitute for button mushrooms in recipes. In Asia, Straw mushrooms are primarily sold fresh, but outside of Asia, the mushrooms are found in canned and dried forms. Straw mushrooms pair well with spices such as turmeric, garam masala, cumin, and ginger, tomatoes, bell pepper, coconut milk, quinoa, noodles, meats such as fish, beef, ham, and poultry, shrimp, crab, tofu, and vegetables such as snow peas, bamboo shoots, carrots, green beans, and bean sprouts. The fresh mushrooms will keep up to one week when stored in a paper bag in the refrigerator. Canned mushrooms will keep up to one year if unopened. Once opened, the mushrooms should be used within one week.

Straw mushrooms have been cultivated for thousands of years in Asia, but the earliest record of cultivation dates back to the 18th century. Buddhist monks at the Nanhua Temple in China grew the fungi on paddy straw for the mushroom’s high nutritional properties and also used it in traditional medicine. Through exposure at the temple, Straw mushrooms widely increased in popularity across China and even became a gift that was given to Chinese royalty. In the modern-day, Straw mushrooms have remained one of the most popular varieties consumed throughout Asia and are cultivated on many different agricultural waste substrates. Besides straw, the mushrooms are grown on cotton waste known locally as “gin trash.” This substrate is the fiber matter left after cotton is extracted for commercial use. Straw mushrooms are also grown on compost piles, grass, leaves, and wood chips, and can be found growing naturally on termite mounds in Southeast Asia.

Straw mushrooms are native to China and have been growing wild since ancient times. Cultivation of the mushroom began in the early 18th century China and has since increased across Southeast Asia, remaining primarily in the areas that they are grown in due to their short shelf life and delicate nature when fresh. Today Straw mushrooms still grow wild in Asia and are also cultivated on a small scale in the Philippines, Malaysia, Thailand, Vietnam, China, and Eastern Europe. Outside of Asia, the mushrooms are available in canned and dried form in Western Europe, North America, and Australia.

Recipes that include Straw Mushroom. One