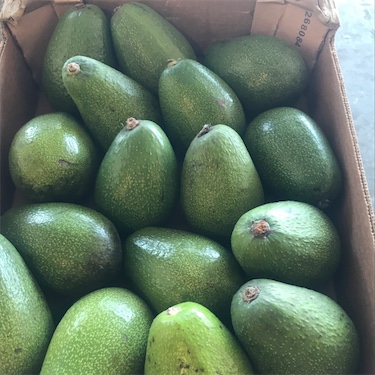 Maguey leaves are large in size and long, thick, and pointed in shape, about ten centimeters wide and can grow up to 1-2 meters in height. The dense leaves contain a sweet sap and are dusty, dark green to gray-green bordered with sharp spines. Each leaf also bears one larger needle-like spike at its very tip that is approximately three centimeters long. Maguey plants produce 20-50 leaves that grow in a rosette shape. When the plant is mature, which typically takes between 10-15 years, a flower stalk will sprout in the center of the plant. The stalk will grow vigorously and can reach up to ten meters tall. Maguey plants only have one flowering cycle and once the plant flowers, the plant will die. When cooked, Maguey leaves have a sweet, caramel-like flavor.

Maguey leaves, botanically classified as Agave americana, grow on a flowering plant and are members of the Agavaceae family. Also known as American agave or the Century Plant, there are over two hundred varieties of Maguey plants. Maguey leaves are commercially cultivated to make tequila and mezcal and only about thirty of the varieties produce the sap needed to make mezcal. Recently maguey worms have also become a popular delicacy in Mexico. The worms are found by cutting away Maguey leaves and getting close to the center of the plant where moths have deposited their larvae onto the plant. Early production of mezcal included these worms in the bottle to attract curious tourists into drinking the local spirit. It is believed by some that finding a maguey worm in one's drink is a sign of good fortune and luck. In addition to liquor production, Maguey leaves are also used in culinary and medicinal applications.

Maguey leaves are a good source of iron and calcium, particularly when dried. It also has vitamins A, B1, B2, C, D and K and inulin, which is a probiotic fiber that is good for digestive health.

Maguey leaves are best suited for cooked applications such as grilling, baking, and roasting. Maguey leaves should not be consumed raw as they are poisonous. In Mexico, mixiotes is a dish that uses the outermost layer of a Maguey leaf and typically wraps chicken, beef, lamb, or pork with aromatics and spices and is then steamed. Once cooked, the entire dish is consumed including the Maguey wrapping and is served with avocado and tortillas. Maguey leaves are also used to make the traditional Mexican dish, barbacoa, a barbeque method of slow cooking meats in the ground. The leaves are trimmed and roasted until malleable and are then covered with meats and cooked for at least eight hours. The meats will be extremely tender and have a sweet, smoky flavor imparted from the leaves. Maguey leaves can also be roasted by themselves and cut into small chunks for a sweet, caramel flavored treat. Maguey leaves are enjoyed much like sugarcane, where the fibers are not eaten but discarded once all the sweetness is gone. Maguey leaves will keep for a couple of days when stored fresh in the refrigerator.

The maguey plant was a multi-purpose plant used by the indigenous residents of Mexico’s highlands for centuries, and many people worshipped the plant for its life-giving qualities. The Aztecs believed in Mayahuel, the goddess of the maguey plant. According to Aztec myth, the sweet sap from the plant is known as “aguamiel” or “honey water” and is the blood of Mayahuel. In several drawings, Mayahuel is depicted as sprouting from the center of a maguey plant and feeding her many children with the sap of the plant. Archeologists have found evidence of the usage of maguey for food, drink, and fibers in their excavations as the area would have been uninhabitable if not for the maguey plant. Today, the community of Tlacolula, an area east of Oaxaca Valley, still depends heavily on the plant as their main source of income. Maguey plants are harvested for their hearts and sold to nearby factories to produce tequila and mescal.

Maguey plants are native to Mexico and were believed to have been used by the indigenous residents of the area over 10,000 years ago. Maguey leaves were then spread by Spanish and Portuguese explorers as they brought the leaves back to Europe. Today Maguey leaves can be found in fresh markets and are mainly grown in Central America and parts of the United States.

Recipes that include Maguey. One

Someone shared Maguey using the Specialty Produce app for iPhone and Android.