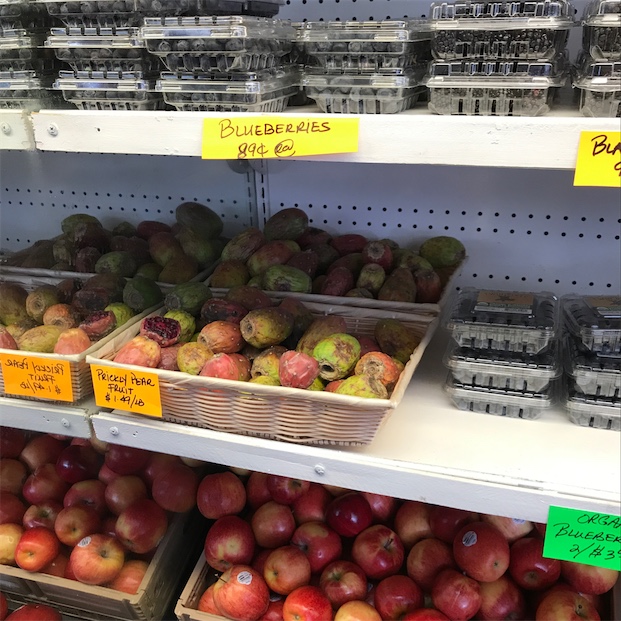 Kale is a non-heading, leafy form of wild cabbage that comes in a range of shapes, sizes, and colors, such as blue-green, yellow-green, white, red, or purple. Different cultivars are classified by differences in their stem length and their leaf structure, as some are flat and others are frilly. The standard Kale we usually find in the grocery store is pale to deep green with large, ruffle-edged leaves and long stems. It is hardy and fibrous when fully mature, and tender enough to be used as a raw salad green when young. The pale green stems are tough and typically removed, while the tightly curled leaves are chewy yet succulent. Depending on the variety, Kale can sometimes be spicy, other times a bit sweet, and usually slightly bitter. In general, Kale offers an earthy flavor with a nutty sweetness that is accentuated when cooked.

Kale is available year-round with a peak season in winter.

Kale is a member of the Mustard family, also called the Cabbage family. ItŌĆÖs a variety of Brassica oleracea known as acephala, meaning ŌĆ£without a headŌĆØ, and is essentially a form of primitive cabbage. Over the last few thousand years, this one plant ŌĆō wild cabbage, also called wild mustard plant ŌĆō was selectively bred based on specific morphologic traits in order to create entirely different crops: Kale, head cabbage, cauliflower, broccoli, Brussels sprouts, and kohlrabi. Kale was produced from selections of wild cabbage plants with larger leaves, and today there are many unique Kale cultivars including Scottish curly Kale, the most commonly found variety, Black Kale, an Italian variety known for the dinosaur-like scales on its leaves, and Siberian Kale, known to be one of the most cold hardy. However, it is important to note that Siberian Kale is actually a different species than most other varieties that are derived from Brassica oleracea. Instead, Siberian Kale is classified as Brassica napus, which is still in the same family, although it is more closely related to rutabagas than other Kales.

Kale is rich in antioxidants, and packed with vitamins A, E, K, and B, especially folate. It has a fair amount of protein and iron, and has more vitamin C than other leafy greens. ItŌĆÖs also high in fiber, and has more calcium, gram for gram, than a cup of milk. Researchers have even found that the phytochemicals in Kale may inhibit cancer cell growth. It is important to note that you shouldnŌĆÖt overdo it with raw Kale because, like other cruciferous vegetables, it contains small amounts of substances that can affect the function of our thyroid gland. These substances become inactive with cooking, so if you have existing thyroid problems, then itŌĆÖs safest to stick to cooked Kale. Most of us are fine if we stick to modest amounts of raw Kale, such as a handful, even on a daily basis.

Considering its many forms and stages of harvest, Kale is an incredibly versatile green in the kitchen, and can be used raw or cooked. Young Kale leaves add an earthy flavor to raw salad green mixes, and fully mature Kale is one of the few leafy greens that doesnŌĆÖt shrink much when itŌĆÖs cooked. ItŌĆÖs great saut├®ed, roasted, stewed, and even baked into Kale chips. Just be careful not to over-cook it, as it can develop a more bitter taste. Kale is also often added raw to smoothies, juices, and salads. To prep Kale for use, whether raw or cooked, first remove the tough and fibrous stems. A quick and dirty way to do it is to hold the stem in one hand and strip leaves along the stem away from you. You can also cut the leaves into thin, confetti-like ribbons. A quick massage can help the process of breaking up the cellulose structure of Kale. You can drizzle it with olive oil, salt, and lemon juice, and rub the leaves together in your hands to get a slightly sweeter, much silkier Kale. This leafy green pairs well with garlic, onion, sesame, soy sauce, ginger, smoked or roasted meats, potatoes, grains, oregano, thyme, red pepper, cream, Parmesan cheese, and more. To store Kale, wrap the leaves in a loose bundle with a paper towel or a thin cotton kitchen towel, place them in a large, sealable bag, and refrigerate in the crisper drawer for up to a week.

The name ŌĆ£KaleŌĆØ is a Scottish word derived from ŌĆ£colesŌĆØ or ŌĆ£caulisŌĆØ, terms used by the Greeks and Romans in reference to the whole cabbage-like group of plants. In Scotland, Kale is such an important part of their traditional diet that the word became synonymous with ŌĆ£foodŌĆØ in some Scottish dialects. For example, to be "off one's kale" is to feel too ill to eat.

Kale is one of the oldest forms of cabbage, native to the eastern Mediterranean or Asia Minor. It has been in cultivation for so long, dating back over 2000 years, and has been so spread across prehistoric traders and migrating tribes, that itŌĆÖs hard to pinpoint the exact region of origin. Ancient Greeks and Romans grew both curly-leafed and flat-leafed varieties by the fourth century BCE, and these forms, which were referred to by the Romans as sabellian Kale, are considered to be the ancestors of modern Kale varieties. By the Middle Ages, Kale had spread through Europe and Asia, and was one of the most widely eaten green vegetables throughout Europe. While many believe English settlers brought Kale with them to the New World as early as the 17th century, it was David Fairchild, agricultural explorer for the USDA in the late 19th and early 20th centuries, who was specifically credited with introducing American farmers to Kale, along with mangoes, avocados, dates, nectarines, soybeans, and pistachios. Kale is very easy to grow, and it can handle cold temperatures. In fact, a good fall frost or mild, cool winter can actually impart a high sugar content and fine flavor into the Kale plant.

Recipes that include Kale. One

People have shared Kale using the Specialty Produce app for iPhone and Android.