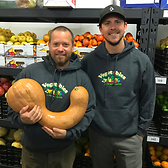 Eureka lemons are a medium to large varietal, averaging 5 to 6 centimeters in diameter, and have an oblong to elliptical shape with a bulbous, round center tapering at each end. The blossom-end features a small neck and pronounced, short point, also cald a mammilla or nipple, and the stem end is generally flatter. The lemon’s peel is moderately thick, clinging tightly to the flesh, and is covered in sunken oil glands giving the surface a slightly rough, textured feel. The peel also ranges in color from pale to bright yellow, sometimes showcasing variegated hues of yellow and green. Underneath the surface, the flesh is encased in a bitter, white, and spongy pith and is divided into 8 to 10 segments by thin membranes. The yellow-green flesh is soft, aeous, and tender, either mostly seedless or containing a few cream-colored, tear-drop-shaped seeds. Eureka lemons contain volatile aromatic oils that are released through the peel, emitting a bright, sweet, and refreshing scent. The lemon’s juice, zest, and flesh are highly acidic, creating a sour, tart, and tangy taste balanced with a subtle sweetness.

Eureka lemons are available year-round, with a peak season in the late winter through early spring.

Eureka lemons, botanically classified as Citrus limon, are an acidic variety belonging to the Rutaceae family. The bright yellow fruits grow on evergreen trees that can reach 4 to 6 meters in height and were developed in Los Angeles in the mid-19th century from Italian lemon varieties. Eureka lemons are highly valued for their aromatic, oily rind, balanced sweet and sharp flavor, and consistency in size and appearance. The variety is often nicknamed the Four-Seasons Lemon by California growers as the trees will bear multiple crops year-round and have a thicker peel, allowing the fruits to be shipped long distances without damage. In the modern-day, Eureka lemons are one of two leading lemon varieties commercially cultivated in the United States. The lemons are versatile, used by chefs and home cooks in culinary preparations, and mixologists in various alcoholic and non-alcoholic beverages.

Eureka lemons are an excellent source of vitamin C to strengthen the immune system while reducing inflammation. The fruits also provide potassium to balance fluid levels within the body, fiber to regulate the digestive tract, calcium and phosphorus to protect bones and teeth, and other nutrients, including zinc, copper, magnesium, B vitamins, iron, niacin, and folate.

Eureka lemons have an acidic, sweet, and tart flavoring well suited for a wide range of sweet to savory preparations. The lemons are not typically consumed out of hand due to their sour, mouth-puckering nature, but the juice and zest provide bright notes to create depth of flavor in sauces, dressings, oils, and marinades. Eureka lemon zest can be shaved over soups, curries, and fish dishes or incorporated into cakes, pies, muffins, bread, and cookies. The juice can also be squeezed over leafy green salads, stirred into cream-based pasta dishes, or sprinkled into bean side dishes. Try using Eureka lemons to make marmalade, lemon curd, or syrup. Slices of the lemon can also be cooked with roasted meats or vegetable dishes, and the zest and juice are popularly mixed into cocktails, lemonade, sparkling beverages, and tea. Eureka lemons can be used in any recipe calling for common tart lemons. The acidic fruits can also be dried and ground into a seasoning or canned or preserved for extended use. Eureka lemons pair well with fruits such as strawberries, cranberries, cherries, blueberries, and coconut, seafood including fish, crab, shrimp, and scallops, meats such as poultry, beef, and turkey, cheeses including gruyere, ricotta, and parmesan, pistachios, and herbs such as basil, thyme, and mint. Whole, unwashed Eureka lemons will keep up to one week when stored at room temperature and around one month when kept in the refrigerator. The juice and zest can also be separately frozen for extended use.

The word Eureka is derived from the Greek word “heureka,” meaning “I have found it.” There are several antidotal stories of how the Greek word became a popular expression, and the most well-known tale was centered around the famous Greek mathecian Archimedes. While none of these stories have proven sources to support that these were actual events, the legend recounts that Archimedes exclaimed, “Heureka! Heureka!” when he discovered the method for determining the purity of gold. Several cturies later, eureka was used in the 1848 California gold rush to express surprise and sudden discovery. This exclamation eventually became California’s state motto in 1963 and was also placed on the state seal in 1849 in honor of the gold rush. Arounthe same time in the late 1800s, Eureka lemons were given this moniker as the variety was a surprising discovery to California growers, initially named Garey’s Eureka and later shortened to Eureka.

Eureka lemons were developed in Los Angeles, California, in 1858. Experts believe Eureka lemons are descendants of lunario lemons that were brought from Italy in the early 1800s. The seeds were planted in 1858, and a couple of years later, breeders C.R.orkman and Andrew Boyle selected the most promising seedlings from the group for commercial cultivation. The selected seedlings were propagated, and in 1877, Workman gave well-known Los Angeles nurseryman Thomas A. Garey the lemon’s budwood to graft oo rootstock in his nursery. Garey named the fruits Garey’s Eureka, and the variety was favored by growers for its everbearing, productive nature and thornless characteristic. After their release, Eureka lemons quickly became widespread throughout citrus-growing regions in California and have remained one of the most produced lemons in the state. Today, Eureka lemons are common in local markets, grocery stores, and distributors and are frequently planted in home gardens. Eureka lemons are cultivated in the United States, Israel, Australia, South Africa, and Argentina.

Recipes that include Eureka Lemons. One