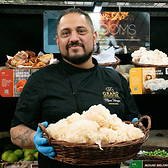 White corn is a sweet corn variety. Its ear is wrapped in layered green to white husks. Both the kernels and milk of white corn are white in color. It has a very high percentage of sugar and water in the composition of the kernels. When at its prime (the milking stage) the kernels will be tender, sweet and succulent. As the ear matures the water decreases, the sugar turns to starch and the kernels become tough with a doughy consistency.

White Corn from Gloria Tamai farms is available from late spring throughout the fall.

At its prime milk stage, the less time white corn is cooked, the better the flavor and texture. Bring a pot of water to a rolling boil; carefully add husked ears; cook or steam until desired tenderness. Steaming preserves flavor, but takes longer. To grill, the ears may be soaked in water in the husks to prevent burning, but will have a steamed taste rather than a grilled flavor. Cook directly on the grill without husks about three minutes on each side. Brush with melted butter while grilling over medium heat. Flavor with a spicy chili-flavored butter for a snappy change of pace. Corn is best used immediately after purchase because its sugar rapidly turns to starch.

Locally grown in California, food historians say that early cuisine was actually created around corn. Researchers claim at least forty-eight varieties of corn were developed by the Incas. Sweet corn is actually divided into white, yellow or bicolor corn. More than a food, corn was at one time considered sacred. The Inca calendar was actually based on the life cycle of the corn crop. Even the maize god was the center of the pantheon of Mayan deities. Today across the South, white corn varieties are preferred.


Recipes that include White Corn. One