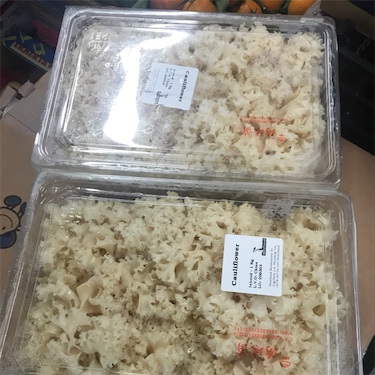 Yellow Holland bell peppers are medium to large in size, averaging seven centimeters in length and five centimeters in diameter, and are rounded, square, and globular in shape with 3-4 lobes and a thick green stem. The smooth skin is firm, glossy, and pale green when young transforming to bright yellow when mature. Underneath the skin, the vibrant yellow flesh is thick, crisp, and succulent, with a hollow cavity that contains very small, flat cream-colored seeds and a thin membrane. Yellow Holland bell peppers are crunchy and juicy with a mild, sweet flavor.

Yellow Holland bell peppers are available in the late spring through fall.

Yellow Holland bell peppers, botanically classified as Capsicum annuum, are a sweet variety that are members of the Solanaceae family. Yellow Holland bell peppers have historically been grown in the Netherlands, where the practice of cultivating the peppers in hothouses under controlled temperature and light was pioneered, allowing for consistent fruit size, dense flesh, and higher yields. In Holland, there is even an advanced water system that is run by computers and uses water droplets with added nutrients to monitor the growth of the fruits and reduce waste. Yellow Holland bell peppers are favored by chefs and home cooks for their sweet flavor, thick flesh, and bright color.

Yellow Holland bell peppers are best suited for both raw and cooked applications such as roasting, baking, grilling, and sautĂ©ing. The peppers can be used fresh and chopped into salsa, sliced and served on vegetable trays with dips, layered into sandwiches, wraps, and burgers, or diced and tossed into fresh green salads. They can also be roasted and mixed into sauces for pasta or vegetable side dishes, grilled and served with roasted meats, sautĂ©ed and mixed into stir-fries, or layered in tacos. Yellow Holland bell peppers pair well with red and white onions, garlic, green onions, chives, cilantro, oregano, thyme, basil, parsley, jalapenos, broccoli, cauliflower, mushrooms, potatoes, avocado, and meats such as beef, pork, poultry, fish, and shrimp. The peppers will keep up to one week when stored unwashed in the crisper drawer of the refrigerator.

Yellow bell peppers are a popular ingredient and crop in Mediterranean regions and are commonly used in everyday cooking. In Italy, many villages consume the fresh produce that is grown in that region as the climate is mild and the growing season is long. Peperonata is a favorite Italian dish that incorporates stewed bell peppers, tomatoes, onions, and other in-season vegetables and is typically served with fresh bread, fish, or as a topping for grains and polenta. Other common ingredients include basil, eggplant, mushrooms, and potatoes and can be served as a side or main dish.

Bell peppers are indigenous to tropical America and have been growing since ancient times. Portuguese and Spanish explorers are credited with spreading sweet peppers from the New World to the Old World, and the Yellow Holland bell pepper was created in Holland in the early 1980s. Today Yellow Holland bell peppers are found at local farmers markets and specialty grocers in Europe, Asia, South America, and North America.

Recipes that include Yellow Holland Bell Peppers. One