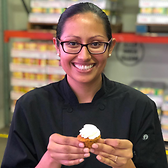 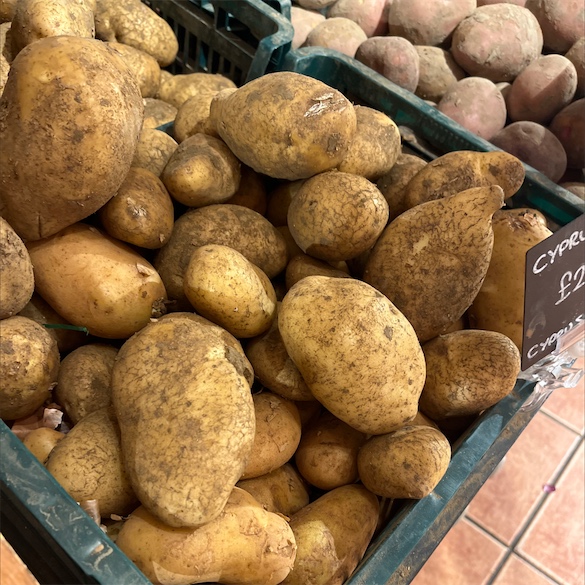 Empire apples are a small to medium-sized varietal with a slightly lopsided, round to ovate shape, sometimes showcasing an irregular, slanted appearance. The apple’s skin is semi-thick, chewy, and tough and has a yellow-green base, covered in crimson to brick red blush, striations, and striping. The surface also has a semi-glossy, smooth, and waxy texture with small but prominent white lenticels. Underneath the surface, the white to ivory flesh is firm, dense, and aqueous with a crisp and crunchy consistency. The flesh also encases a central fibrous core filled with black-brown seeds. Empire apples have an initially sweet flavor followed by a pleasant, tart aftertaste with tangy, vinous nuances.

Empire apples are available in the fall through winter.

Empire apples, botanically classified as Malus domestica, are a mid-season variety belonging to the Rosaceae family. The American apples were developed in the late 20th century as a part of an initiative of the New York Agricultural Experiment Station in Geneva, New York, to create a cultivar with improved resistance to disease, flavor, and texture. Empire apples are a cross between two well-known varieties, red delicious and mcintosh apples, and grow on trees that range between 3 to 4 meters in height. After their release to commercial markets, Empire apples were highly favored for their sweet-tart flavor and crisp, dense flesh. The apples resist bruising and can be exported without damage, and they fill a gap in the harvest season between their parent varieties. In the modern-day, Empire apples are considered the most successful variety released from the Agricultural Experiment Station in Geneva, and the apples are an all-around cultivar utilized in fresh and cooked preparations.

Empire apples are an excellent source of vitamin C to strengthen the immune system, reduce inflammation, and boost collagen production in the skin. The apples also provide fiber to regulate the digestive tract, potassium to balance fluid levels within the body, vitamins including vitamins A, E, and K, and other nutrients such as magnesium, boron, copper, iron, zinc, calcium, and phosphorus.

Empire apples have a sweet-tart flavor well suited for fresh and cooked preparations. The multi-purpose apple can be consumed straight, out of hand, or it can be sliced and tossed into salads as the flesh retains its white hue for extended periods. The ples can also be sprinkled with lemon juice to prolong their white appearance and are popularly chopped and mixed into grain bowls, slaws, fruit dishes, overnight oats, and oatmeal. The apple’s crisp flesh can be sliced and dipped in chocolate as a sweet treat, candied whole, or blended into juices, smoothies, and ciders as a tangy flavoring. In addition to fresh preparations, Empire apples hold their shape well when heated and can be roasted, baked, sauteed, and pureed. Empire apples are often baked into scones, fritters, dumplings, cakes, muffins, pies, cakes, and strudels, hollowed and stuffed with dried fruits and nuts, or pureed into sauces. The apples can also be incorporated into stuffing, sauteed as a side dish to roasted meats, simmered into jellies and jams, or cooked into apple butter. Beyond fresh and cooked preparations, Empire apples can be frozen or dried for extended use. Empire apples pair well with fruits such as strawberries, coconut, pears, and cherries, cheeses including brie, chear, goat, and blue, potatoes, herbs such as rosemary, mint, and parsley, vanilla, caramel, brown sugar, and spices such as ginger, cinnamon, cloves, and nutmeg. Whole, unwashed Empire apples will keep 1 to 2 months when stored in the refrigerator’s crisper drawer. In professional cold storage, the apples can be kept for up to ten months.

Empire apples were named by Dr. Roger Way in honor of the apple’s home state of New York. Historians trace the origins of the state’s nickname to George Washington, as the state had an abundance of resources and the potential for profitable busine. Washington wrote a thank you letter in 1785 to the New York Common Council for giving him the Freedom of the City, and in his description of New York, he described the state as being “The Seat of the Empire.” The nickname was eventually shortened to the Empire State and was used on license plates in 1951 through the mid-1960s, later reappearing in 2001. Empire apples were also famous for their founder, Dr. Roger Way. Dr. Way was one of the most recognized American apple breeders of the 20th cent Dr. Way received his doctorate in pomology and was frequently seen on news, radio, and television shows in the 1980s, around the same time as the Empire apple’s release. One of Dr. Way’s memorable life stories was his involvement in sampling the research seedlings. Dr. Way recalled trying approximately 200 apples a day to understand and distinguish flavors between potential seedlings. In his career, Dr. Way created over 16 new apple cultivars and gained worldwide notoriety for his varieties. and Empire apples were even featured on the primetime TV show Jeopardy. The trivia question stated, “Roger Way tasted 200 of these a day, helping him develop the Empire and Jonagold types.” The correct answer was, “What are apples.”

Empire apples were developed in New York in the late 20th century through the New York Agricultural Experiment Station in Geneva, New York. Cornell University fruit nutritionist Lester C. Anderson crossed mcintosh apples with red delicious apples througa series of open-pollinated experiments in 1945 at his orchard in the Hudson Valley. Later on, Geneva Experiment Station breeders visited Anderson’s farm, gathered around twenty bushels of apples, extracted the seeds, and planted them in orchards at the experiment station. By 1947, there were over 1,199 seedlings of the mcintosh and red delicious cross, and each seedling being studied was labeled as a variation of NY 45500. The seedlings were continuously studied, sorted, and culled for two decades, and when breeder Dr. Roger Way joined the Geneva team in 1949, he selected a seedling known as NY 45500-5 for commercial cultivation. Dr. Way named the variety Empire and officially introduced the new cultivar on September 15th, 1966, at the New York State Fruit Testing Association Meeting in Geneva. Empire apples quickly rose in popularity among New England growers, and by 1974, the United States Department of Agriculture deemed the variety commercially significant. Empire apples also received an Outstanding Fruit Cultivar award in 1987 from the American Society for Horticultural Science. Today Empire apples account for almost half of the apples exported out of New York State and are within the top ten of the most commercially grown varieties within the United States. When in season, Empire apples are sold through farm stands, local markets, grocers, and distributors in the United States, especially in the northeast, and are also grown on a smaller scale in the United Kingdom and Canada.

Recipes that include Empire Apples. One