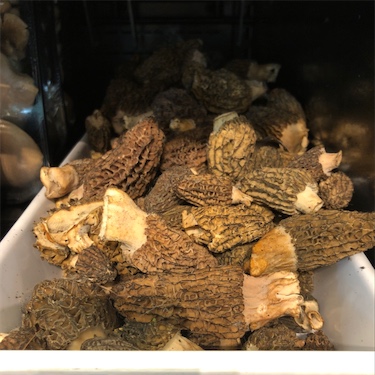 Malang Cherry apples are a very attractive dark red color, often flushed or striped with red and overlaid on a yellow-green background. White lenticels are sometimes visible. Malang Cherry apples vary in size, and are round-conical or oblong-conical in shape. The flesh is creamy white, with an aromatic, balanced, and refreshing flavor. Malang Cherry apples can be grown in tropical climates such as Indonesia because they do not require a long chilling time during cold winters to grow, an unusual quality for apples. The tree is a heavy and reliable cropper, and is resistant to some disease (though susceptible to fireblight and rust).

Malang Cherry apples are available in the fall through early spring.

Malang Cherry apples are better known as Rome Beauty apples, with the same botanical name (Malus domestica). Malang Cherry apples are small Rome Beauty apples grown in Indonesia, where they have adapted well to the tropical climate. This variety is well-known in many parts of the world, and has been used as a parent apple in many breeding programs.

Apples including the Malang Cherry are high in fiber, carbohydrates, and Vitamin C, and low in calories, fat, and protein. The fiber in apples aids the digestive system, lowers blood sugar levels, and improves satiety. Antioxidants found in apples, which have a variety of beneficial health effects, include Vitamin C, quercetin, and catechin.

The Malang Cherry apple is primarily used as a cooking apple. They have good flavor when cooked and keep their shape when cooked or baked. Combine with spices such as cinnamon, vanilla, and ginger to make a dessert, or with savory ingredients such as chilies and rice to make traditional Indonesian recipes. They are less impressive as dessert apples, since their flavor is not particularly remarkable. Malang Cherry apples can also be dried. Malang Cherry apples store very well, lasting several months in cool, dry storage such as the refrigerator.

Although most apples don’t grow very well in tropical Indonesian climates, a few do, such as Malang Cherry apples. By the 1960s, Malang Cherry apples were being grown in Batu, Malang, East Java. Apples grown in this region have since been known as Apel Malang. Other types include the Anna apple and the Malangi apple.

Apples were brought to Australasia in the 1930s by the Dutch, where they were planted in East Java. Rome Beauty apples in particular were first grown in Ohio in 1816 or 1817, and then brought to Indonesia in the mid-twentieth century. Cherry Malangs grow well in both temperate and warmer/tropical climates such as Indonesia, Australia, Italy, and the southern United States.

Recipes that include Malang Cherry Apple. One