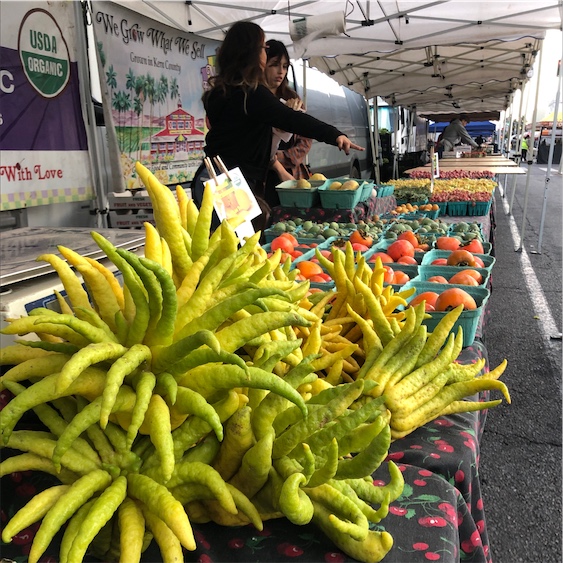 Vietnamese coriander is a leafy herb comprised of jointed stems and elongated, tapered, and blade-like leaves. Each leaf is generally narrow and small, averaging 1 to 4 centimeters in length, and has a lanceolate shape with a point on the non-stem end. The leaves also showcase bright green hues, sometimes marked with a burgundy to crimson crescent shape at the base near the stem. Young Vietnamese coriander plants typically do not bear the burgundy markings, and the degree of coloring will vary depending on the variety. Vietnamese coriander leaves have a soft, pliable, and crisp consistency with a smooth surface. The stems are round, fibrous, and green to red, displaying prominent joints at each leaf connection. Vietnamese coriander is aromatic and has an herbal, grassy, and green flavor with musky citrus and spice nuances, followed by a peppery, zingy aftertaste. It is important to note that young, tender leaves are preferred for culinary use. Mature leaves tend to develop a bitter and acrid flavor with a toothsome texture.

Vietnamese coriander is available year-round, with a peak season in the late spring through the early fall.

Vietnamese coriander, botanically classified as Persicaria odorata, is an aromatic herb belonging to the Polygonaceae family. The plant is low-growing, reaching between 15 to 30 centimeters in height, and is native to warm and humid regions of Southeast Asia. Vietnamese coriander is known by many regional names, including Rau Ram in Vietnam, Daun Kesum in Malaysia, Laksa leaf in Singapore, and Hot mint, Vietnamese mint, and Vietnamese cilantro. The plant is commonly found in the wild and is also cultivated on a wide scale as a finishing herb in Southeast Asian cuisine. Vietnamese coriander has a flavor similar to cilantro and is used interchangeably with mint and cilantro in soups, curries, and noodle dishes. Outside of Southeast Asia, Vietnamese coriander is a specialty herb primarily cultivated in home gardens. The herb is favored for its ability to be grown in warm weather and is a popular summer garden alternative to cilantro in Australia, the United States, and Europe.

Vietnamese coriander is a good source of flavonoids, compounds that contain antioxidant-like properties to strengthen the immune system and protect the body against free radical damage. In Southeast Asia, Vietnamese coriander is used as a natural medicine to reduce symptoms associated with digestion, bloating, and bacterial infections. The leaves are also made into extracts and are applied topically to the scalp to treat dandruff and remove skin impurities.

Vietnamese coriander has a robust, cilantro-like flavor well suited as a fresh herb added to raw and cooked preparations. The leaves are primarily used fresh, as cooking for extended periods of time will lessen its flavor, and they can be tossed into green salads or more hearty potato salads. Vietnamese coriander can also be lightly torn and sprinkled over soups, stews, and curries, mixed into stir-fries, noodle, and rice dishes, or used as a garnish in omelets. The strong flavoring of the leaves complements other pungent flavors in dishes, especially in Vietnamese, Cambodian, Laotian, and Thai cuisine, and the leaves can be incorporated into fresh spring rolls, layered into sandwiches, or chopped into marinades, salsa, and pastes. In Southeast Asia, Vietnamese coriander can be used as a substitute for peppermint or cilantro and is frequently served with duck, fish, and poultry dishes. Asam pedas is a famous Malaysian curry-like dish incorporating spicy, sour, and savory spices over fish and vegetables, topped with fresh Vietnamese coriander. The fragrant herb is also an integral flavoring in larb, the national dish of Laos. Larb is comprised of minced meat with aromatic herbs, spices, and crunchy vegetables to create a tangy and refreshing salad, favored as a meal on hot, humid days. Vietnamese coriander pairs well with seafood such as crab, prawns, fish, and squid, coconut milk, tomato, aromatics including lemongrass, mint, ginger, chile peppers, green onion, garlic, and sesame, lime juice, carrots, cabbage, and peanuts. Whole, unwashed Vietnamese coriander will keep up to one week when stored in a glass of water and covered with a plastic bag.

Vietnamese coriander is also known as Laksa leaf in Singapore, a name derived from one of the city’s signature dishes. Laksa is a noodle soup that widely ranges in ingredients, depending on the region. The most traditional laksa in Singapore has a coconut milk and curry base, incorporating vegetables such as cucumber, bean sprouts, or celery, tofu, seafood, poultry, and rice noodles. The soup is also infused with flavors of lemongrass, chile peppers, turmeric, and shrimp paste to create a greater depth of flavor. Laksa is customarily served with freshly chopped Vietnamese coriander, and the herb is one of the key flavorings that creates balance and harmony within the robust soup. In Singapore, there is also another laksa variant that was created in the Katong District, a soup famous for its spicy and rich flavor. Katong laksa was developed out of Peranakan cuisine, a unique blend of Chinese, Malaysian, and local cooking styles from the Nusantara region, dating back to the 15th century.

Recipes that include Vietnamese Coriander. One