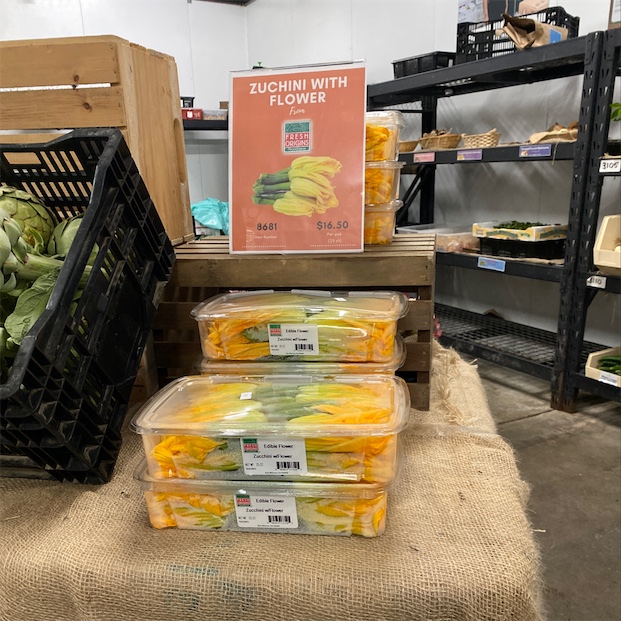 Russian yellow squash has a somewhat uniform, straight, and elongated appearance, averaging 18 to 25 centimeters in length, and an oval to cylindrical shape with slightly tapered, rounded ends. The skin is thin and delicate, being easily scratched or marked, and is smooth with faint ribbing. The skin also ranges in color from pale green-yellow, light yellow, to darker yellow depending on maturity and specific variety. Underneath the surface, the flesh is pale yellow to ivory, crisp, and aqueous, encasing many small, oval and flat, cream-colored seeds. Russian yellow squash has a neutral, mildly sweet flavor with light nutty notes.

Russian yellow squash, botanically classified as Cucurbita pepo, are young, summer varieties that belong to the Cucurbitaceae family. There are many cultivars of yellow squash that are generally marketed under Russian yellow squash, including “yellowfruit,” which is the English translation of the name of one of the most popular Russian varieties. Russian yellow squashes were developed at research centers throughout Russia to create commercially viable varieties showcasing qualities such as early ripening, resistance to disease, cold tolerance, and extended shelf life. These qualities make the squashes suitable for transport and are often exported to neighboring countries as a source of income. Home gardeners also favor Russian yellow squashes in Russia and Central Asia as the plant is compact and produces a large number of squashes that can be prepared in everyday fresh and cooked vegetable applications.

Russian yellow squash is an excellent source of vitamins A and C, which are antioxidants that can help rebuild collagen and boost the immune system. The squashes are a good source of potassium, magnesium, fiber, manganese, and phosphorus.

Russian yellow squashes are best suited for both raw and cooked applications such as roasting, stuffing, baking, grilling, boiling, sautéing, steaming, and frying. The squashes can be consumed with the skin on when harvested young, and they retain their color even when cooked. The squashes can be chopped into green salads, sliced into wedges for dips, layered into sandwiches, thinly sliced and coated in fresh herbs and yogurt as a cooling side dish, or minced into spreads and sauces. Russian yellow squashes can also be halved, lightly scooped out, and filled with meats, cheeses, and fillings, sliced and fried for a crispy bite, spiralized and used as a pasta substitute, sautéed for a healthy side dish, or tossed into soups and stews. In a variation of chicken kiev, squashes can be grated into the filling of the roulades before cooking. Russian yellow squash can also be pickled or canned for extended use. Russian yellow squashes pair well with garlic, herbs such as mint, basil, and parsley, tomatoes, bell peppers, scallions, and meats such as poultry, pork, beef, or fish. The fresh squash will keep 1-2 weeks when stored in a plastic bag in the crisper drawer of the refrigerator.

In Russia, many homemade jarred and canned goods are prepared in the summer and fall to provide vegetables during the harsh winter season. The majority of these vegetables are grown on small plots of land known as dachas, and Russian yellow squash is a specialty item cultivated for its high nutritional properties and easy-to-grow nature. Excess squashes are commonly grated and made into kabachkovaya ikra, which is a traditional spread or puree made with varying combinations of onions, tomatoes, eggplant, peppers, and carrots. There are many variations of this spread, with each family having their own secret recipe, and the spread can be pureed into a smooth consistency or left slight chunky for added texture. Kabachkovaya ikra translates to mean “squash caviar” and is also widely found premade in grocery stores as a staple spread in the Russian diet. The spread is popularly layered on toast with avocado and egg, used as a dipping sauce for chips, mixed with boiled potatoes, or is served as a side dish.

Many of the yellow squash varieties sold under the Russian yellow squash name were developed at regional experimental stations under the Russian Research Institute of Plant Production in the 20th century. Today Russian yellow squashes are highly cultivated in Russia and other regions of Central Asia and are grown for local consumption and for export to neighboring countries. The squashes in the photo above were found at the Golden Horde market in Almaty, Kazakhstan.