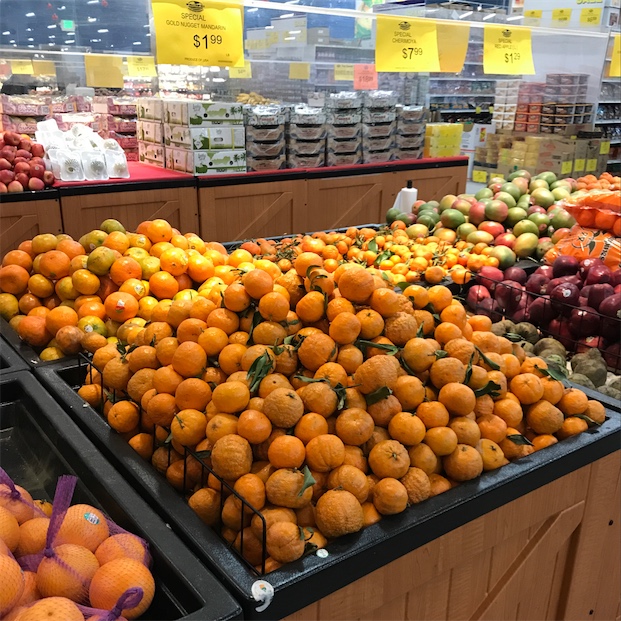 Sugar Pie pumpkins are small to medium in size, averaging 15-20 centimeters in diameter and weighing only 2-6 pounds, and are round, globular, and uniform in shape. The smooth orange rind has shallow and light vertical ridging that connects into a thick, ridged, green-brown stem. The flesh is moist, pale orange, fine-grained, and dense encasing a central cavity filled with pulp and flat, cream-colored seeds. When cooked, Sugar Pie pumpkins are tender and buttery with a sweet, earthy, and nutty flavor.

Sugar Pie pumpkins are available in the fall through early winter.

Sugar Pie pumpkins, botanically classified as Cucurbita pepo, grow on sprawling vines and are members of the Cucurbitaceae family along with squash and gourds. Also known as the Pie pumpkin and Sugar pumpkin, Sugar Pie pumpkins are used as a baking pumpkin and are highly regarded for their smooth texture and sweet, rich flavors.

Sugar Pie pumpkins are best suited for cooked applications such as roasting or boiling. They are most commonly used for baking and can be pureed into pies, cheesecake, pancakes, tarts, bread, custards, and flan. In addition to sweet preparations, Sugar Pie pumpkins can be used in savory dishes such as soups, hollowed out, stuffed, and baked similarly to acorn squash, cubed and roasted as a side dish, or sliced into wedges and grilled. They are also used to make gnocchi, chili, empanadas, and curries. The seeds can be toasted, salted, and served as a snack. Sugar Pie pumpkins pair well with sage, rosemary, thyme, oregano, coriander, cinnamon, cloves, nutmeg, swiss chard, spinach, kale, peas, beans, hazelnuts, lobster, ham, potatoes, tomatoes, apples, and Gruyere cheese. They will keep 2-3 months when stored in a cool and dry place.

Sugar pumpkins are believed to be an heirloom variety that was used in the original pumpkin pie recipes by early American colonists. Native Americans introduced many different pumpkin varieties to the colonists because of the fruit’s long storage life and versatile nature, and the heirloom varieties would provide seeds for the next year’s crop. Colonists used small pumpkins, such as the Sugar, hollowed them out, filled them with spices, honey, and milk, and baked them over an open fire for a sweet and toasted treat.

Recipes that include Organic Sugar Pie Pumpkins. One