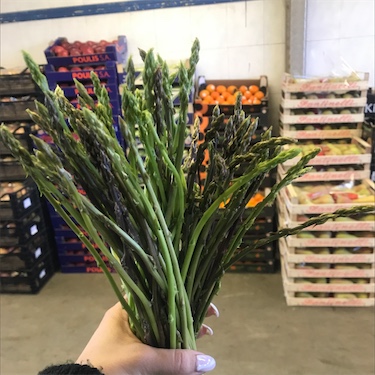 Meyer lemons are a small to medium variety, averaging 6 to 8 centimeters in diameter, and have a round to oval shape. The peel is thin, smooth, glossy, golden yellow to orange, and aromatic, lightly textured with glands that release essential oils. Underneath the peel, there is a thin and spongy white pith enveloping yellow-orange flesh, divided into 9 to 10 segments by white membranes. The flesh is also soft, tender, and aqueous, encasing a few seeds or being found seedless. Meyer lemons are highly fragrant and emit a bright, herbal scent with subtle spice-filled notes. The fruits also contain low acidity and a high sugar content, developing a sweet, zesty flavor with floral undertones.

Meyer lemons are available year-round, with a peak season in the early winter through the spring.

Meyer lemons, botanically classified as Citrus x meyeri, are a natural hybrid belonging to the Rutaceae family. The round, thin-skinned fruits are believed to be a cross between a lemon and either a mandarin or a sweet orange and grow on evergreen trees that can reach up to 3 meters in height. Meyer lemon trees were first used as an ornamental house plant in China and were highly valued for their fruits, evergreen foliage, productive nature, and aromatic scent. The lemons were then introduced into the United States in the early 20th century through Frank Meyers and were named in honor of the well-known plant explorer. In the modern-day, Meyer lemons are not commercially produced as their thin skins can easily be damaged in transport. Despite their limited availability, the variety has become a favored seasonal fruit in farmer’s markets and is frequently grown in home gardens, used by chefs and home cooks for their sweet, floral flavoring. Meyer lemons are distinguished from other lemon varieties by their smaller size, smoother, thinner rind, and low acidity, and the entire fruit is edible, including the peel and flesh.

Meyer lemons are a good source of vitamin C, an antioxidant that reduces inflammation, boosts the immune system, and stimulates collagen production within the skin. The fruits are also a source of potassium to regulate fluid levels, calcium to strengthen bones and teeth, and magnesium to maintain healthy blood pressure.

Meyer lemons contain low acidity, developing a sweet juice, zest, and flesh suitable for both fresh and cooked applications. When raw, Meyer lemons can be chopped and tossed into dips, sliced thinly and added to salads, or infused into dressings, olive oils, and vinegar. Meyer lemons are also used for their fragrant zest and juice, which is sweeter and more floral than a eureka or lisbon lemon. The lemons can be sliced thinly and used as a topping over pizza, layered under meats and roasted to develop a caramelized texture, zested into pasta, juiced for cocktails and non-alcoholic beverages, or used to flavor soups and stews. Meyer lemons can also be incorporated into cookies, cakes, scones, macarons, muffins, and tarts, simmered into lemon curd, or the peels can be candied and eaten as a sweet treat. In addition to fresh and cooked applications, the lemons can be scored, packed in salt, and preserved for extended use. Meyer lemons pair well with herbs such as mint, thyme, basil, parsley, and rosemary, meats such as poultry, turkey, and fish, other seafood, potatoes, asparagus, broccoli, peas, cranberries, and parmesan. Whole Meyer lemons will keep 5 to 10 days when stored in a plastic bag in the refrigerator’s crisper drawer. The juice can also be frozen for up to 6 months.

When Meyer lemon trees were destroyed in the 1940s due to containment of the tristeza virus in the United States, the variety’s reputation was severely damaged and needed to be remarketed for future success. The new clones of virus-free Meyer lemon trees were named the Improved Meyer lemon tree in hopes of encouraging gardeners to plant the variety, but Meyer lemons were slow to gain traction among growers, not re-popularized until the 1970s. One of the leaders who helped to change the perspective surrounding Meyer lemons was Chef Alice Waters. Chef Waters remembers gathering the lemons from trees planted near her restaurant Chez Panisse in Berkley, California, and used the fruits in a bright and clean sherbet. As Waters and her team focused on locally sourced, fresh ingredients, Meyer lemons became a signature flavoring used in savory and sweet dishes at the increasingly famous Chez Panisse. Meyer lemons continued to rise in popularity as Martha Stewart also touted the variety’s floral flavor in the late 1990s. Stewart frequently used the sweet lemons in cakes, pasta dishes, and tarts and planted the cultivar in her personal garden, re-establishing Meyer lemons as a chosen, home garden variety.

Meyer lemon trees were discovered in China and were initially cultivated as a houseplant grown in small containers for their ornamental nature. In 1908, the variety was brought to the United States from Beijing by agricultural explorer Frank Meyer in partnership with the United States Department of Agriculture. Meyers was sent on several expeditions to China to research and introduce new plants for commercial cultivation and believed the sweet, low-acid Meyer lemon would diversify the American lemon market. The variety was planted in Florida, California, and Texas in the early 20th century, but in the 1940s, the trees were discovered to be carrying the tristeza virus, a disease that had already devastated millions of trees worldwide. Almost all of the Meyer lemon trees were destroyed in the United States to save other established citrus varieties, but a few virus-free Meyer lemon trees were saved in the 1950s and used to repropagate the cultivar. In 1975, the newly released Meyer lemon trees were called Improved Meyer lemons and were reintroduced to home gardeners and growers. Today Meyer lemons are beloved by chefs, home cooks, and home gardeners in North America, Asia, Australia, New Zealand, and South Africa. Within the United States, Meyer lemons are primarily found in citrus growing regions of California, Texas, and Florida. When in season, the lemons are sold through farmer’s markets and specialty grocers.

Recipes that include Meyer Lemons. One