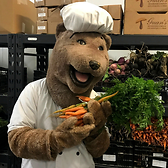 Gravenstein apples have green to yellow undertones and are covered in dense red and orange striping. Its crisp flesh is creamy white and rich with juice. Highly aromatic the Gravenstein apple offers a classic sweet-tart apple flavor with nuances of honey.

Gravenstein apples are a member of the rose family (Rosaceae) and of the species malus domestica. Though touted by many as one of the best tasting baking apples on the market the Gravenstein has had some set backs preventing it from becoming a successful commercial variety. It has a short and early harvest season, does not ship well and has a shorter shelf life compared to most apples. Gravenstein trees also have delicate stems which results in the fruit being prone to pre harvest drop.

Gravenstein apples are low in calories, cholesterol free and rich in soluble fiber, which has been shown to promote a healthy cardiovascular system. They also contain a fair amount of potassium and vitamin C as well as some iron, vitamin A and boron, most of which is found in the skin.

Gravenstein apples are renowned for their exceptional sweet tart flavor that shines in both cooked and raw preparations. Pair with chicken, pork, onion, mushrooms and robust cheeses in savory preparations or pear, vanilla, cinnamon and chocolate in sweetpreparations. When cooked the flavor of the Gravenstein apple is enhanced and the flesh will hold its shape. They can be baked, sautéed, roasted or slow cooked and pureed. A popular dessert apple Gravenstein makes an excellent addition to pies, tarts, cakes and cookies.

The earliest documentation of Gravenstein apples being grown is in South Jutland, Denmark in 1669. The apple made its way to the United States in 1790 by way of German migrants and Russian fur traders. The first Gravenstein orchards were planted in thrly 1800’s in California at Fort Ross. Gravenstein apples were a major crop in Sonoma County, California in the early to mid 1900’s where they were sold not only for fresh use but also as a processing apple for juice, sauce, vinegar and brandy. The te 1900’s brought about a transition in the industry and much of the land previously used for apple production is now used for wine grape production. Today Gravenstein apples are grown in California, Oregon, Washington State and overseas in northern Europe.

Recipes that include Gravenstein Apples. One