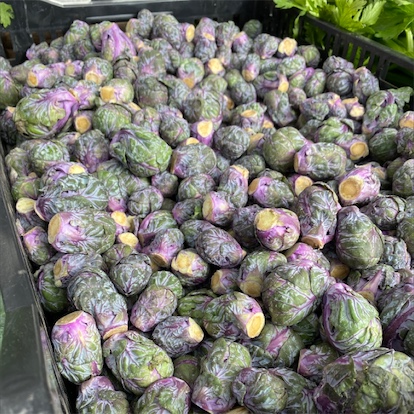 The French Breakfast radish (Raphanus sativus) is an heirloom variety radish and a member of the Brassicaceae or Cruciferae family. Also known as Breakfast radish, Flambeau, Flambo and Les Radis Petit Déjeuner both the root and leafy greens of this radish are utilized in culinary preparations.

French Breakfast radishes contain Vitamin C, calcium, magnesium, folate, and potassium. Natural medicine practitioners recommend radishes for their ability to promote healthy digestion. French Breakfast radishes also contain glucosinolates, which have been shown to be beneficial in the prevention of certain cancers and are what give radishes their distinct peppery flavor.

Dice French Breakfast radishes and toss in salads or add to tacos, omelets or tea sandwiches. They can be used whole and roasted, braised or pickled. The subtle heat of the peppery French Breakfast radish marries well with sweet cream, butter, and salt. When serving radishes with butter or creamy cheeses score at the tip with an X to help the dips better adhere to the radish. The greens of the French Breakfast radish can go straight into salads, or be added to soups or pastas. Radishes pair well with blue and feta cheeses, as well as lemon juice and fresh herbs. They also make an attractive edible garnish on crudité trays and cheese boards. To store keep radishes refrigerated and use within one week.

French Breakfast radishes are believed to have gotten their name as marketers were known to snack on the radishes with salt and butter mid-morning while they sold their produce. Additionally, radishes were commonly served for breakfast in American colonial times as well as by New York Dutch who enjoyed them along with butter, bread, and tea.

The French Breakfast radish was first introduced in 1879 and quickly became a popular market radish of Paris. Though technically a spring variety radish, the French Breakfast radish can be grown year round. They thrive in mild, Mediterranean climates not prone to frost. In the hot summer months care should be taken to harvest radishes as soon as they mature in order to prevent them from turning bitter, pithy and fibrous. Radish comes from the Greek word for "fast appearing" and like many varieties of radish grows quickly and is typically ready for harvest in twenty to thirty days.

Restaurants currently purchasing this product as an ingredient for their menu. the other 14...

Recipes that include French Breakfast Radish. One