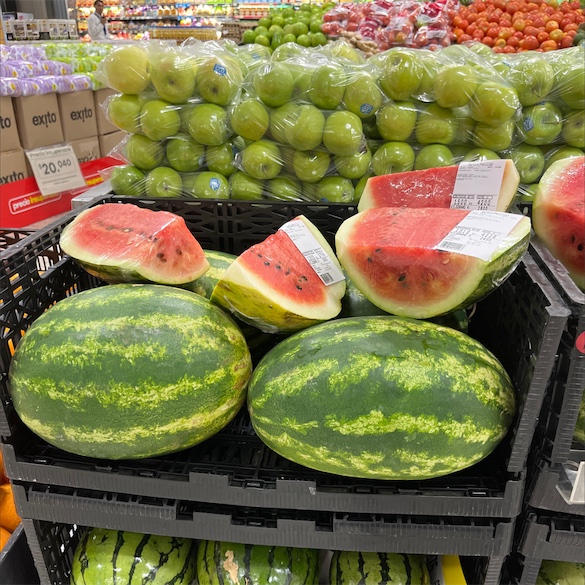 Eight Ball squashes vary in size from small to large, averaging 5 to 12 centimeters in diameter, and have a globular to oval shape, capped with a rough, green stem. The skin is smooth, glossy, and thin, sometimes exhibiting faint vertical ridges, and is dark green, speckled with light green striping and mottling. Underneath the surface, the flesh is white, tinged with pale green to yellow hues, and has a crisp, spongy, and tender consistency. Within the flesh, there are also many small, edible seeds. Eight Ball squashes have a mildly sweet, vegetal flavor with subtle nutty undertones.

Eight Ball squashes are available year-round, with a peak season in the summer.

Eight Ball squashes, botanically classified as Cucurbita pepo, are a unique summer squash variety belonging to the Cucurbitaceae family. Round squash cultivars have been in existence in Europe for decades, first introduced from explorations to the New Wld, and were heavily cultivated, developing many round varieties over time. Despite their popularity in Europe, especially in Italy, it wasn’t until the mid-20th century that round squash varieties established a presence in American markets. Eight Ball squash was the first commercially successful variety to be sold in the United States, and the hybrid squash was created from natural, controlled crossings. Eight Ball squashes were also the first of multiple ball varieties developed by Hollar Seeds United States. The variety was named after the famous eight ball used in billiards, and the skin coloring of Eight Ball squash is sometimes labeled as dark green or “black,” also matching the billiard ball’s color. Eight Ball squashes are a novel variety sold as an alternative to the common, elongated summer squash, and is highly favored by consumers for its unusual shape and rich flavor.

Eight Ball squashes are best suited for both raw and cooked applications, including roasting, steaming, frying, baking, and grilling. The round squashes can be sliced and tossed into green salads, cut and served with dips on appetizer platters, or thinly sliced and coated in herbed oils as a fresh side dish. Though the squash can be eaten fresh, it is more popularly utilized for stuffing as the unique shape is ideal for hollowing and filling with meats, cheeses, nuts, and grains. Eight Ball squash can also be thinly sliced and layered with other summer vegetables in ratatouille, used in place of noodles in lasagna, diced into stir-fries, shredded and fried into pancakes, layered as a vegetable base for pizza, or sliced and sprinkled with cheese as a savory side dish. In baked applications, including bread, cakes, and muffins, Eight Ball squashes are sometimes used as substitutes for zucchini as a binding ingredient. Eight Ball squashes pair well with aromatics such as garlic, onions, and ginger, eggplant, bell peppers, tomatoes, fresh herbs such as cilantro, coriander, and oregano, cinnamon, quinoa, rice, and meats such as veal, beef, pork, turkey, and poultry. Eight Ball squash will keep up to one week when stored in a plastic bag in the refrigerator.

Eight Ball squash earned the title of an All-America Selections winner in 1999, highly valued for its prolific, easy-to-grow nature and compact size. The All-America Selections (AAS) organization was developed in 1932 to promote garden varieties with quality flavor, appearance, and growth characteristics within the United States. The AAS title is a prestigious label given after extensive trialing and judging, and once the variety is selected, it is also immediately available for distribution on the AAS website, encouraging home gardeners and growers across the country to try the cultivar. The Eight Ball squash(a)s success encouraged Hollar Seeds to continue expanding its ball squash line, and they would later go on to release other round varieties, including one ball and cue ball squashes.

Eight Ball squashes are a hybrid variety developed by Hollar Seeds of Rocky Ford, Colorado. In the mid-20th century, Larry Hollar, President of Hollar Seeds, spent four years collecting seeds of round squashes from around the world, and using these seed he conducted purposeful crosses until the Eight Ball squash was created. The variety was released to commercial markets in 1999, and today Eight Ball squashes are primarily found through specialty grocers and farmer’s markets across the United States and in select regions of Europe. The cultivar is also a favored home garden variety grown around the world.


Recipes that include Green Eight Ball Squash. One