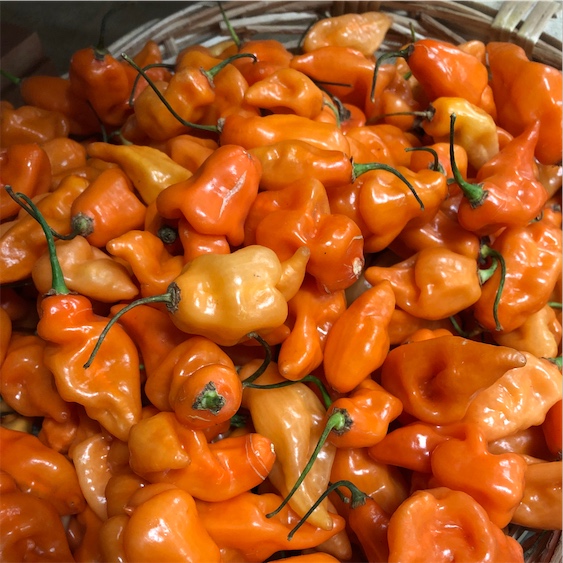 The Court of Wick apple is a small to medium sized variety that is mostly conical in shape. The skin is a beautiful golden yellow, with some red blushing, orange streaks, and small amounts of russeting. Inside, the pale yellow flesh is crisp and quite juicy. The flavor of the Court of Wick is excellent—mostly sweet, with a robust, classic apple taste.

Court of Wick apples are available fall through winter.

The Court of Wick apple is a variety of Malus domestica from Somerset, England, from at least the late 1700s. One of its parents is likely the Golden Pippin. Historically, it has also been called Wood’s Huntingdon.

Apples such as the Court of Wick contain few calories and several nutrients. While they don’t have cholesterol, fat, or sodium, they do contain several grams of dietary fiber and some Vitamin C. One medium-sized apple has only about 100 calories in total.

This is mainly a dessert apple, but is a good quality variety for cider and juicing. When making cider, it serves well as a sweet variety, and can be matched with tarter varieties for a more complex cider. For eating fresh out of hand, pair with cheeses, citrus, cranberries, currants, and walnuts in salads and snacks. The Court of Wick is best picked after at least a week of ripening on the tree. It then stores fairly well, lasting until December or so.

The Court of Wick apple is sometimes also called the Court of Wick Pippin. The word “pippin” simply means an apple grown from a seed, which will be different than the apple the seed came from. In this case, the Court of Wicks is a pippin whose parent was another pippin: the Golden Pippin.

It isn’t known exactly when the first Court of Wick apple was grown, but by the late eighteenth century it was already established in Somerset, England and so had probably been grown in the area at least for several decades. Its name indicates the area of Somerset it was first discovered. Court of Wick is reported to have been raised from a seed of the Golden Pippin. A nurseryman named Wood first marketed this variety in 1790. The Court of Wick tree grows well in both temperate and colder, northern climates, and can withstand harsh winds such as along coastal regions.

Recipes that include Court of Wick Apple. One